Austin Miler
18/08/2020
AFP
Brazilian side Palmeiras have surged ahead with two matches played, but the other three teams will all feel they can challenge for the Round of 16.

Led by a quartet of goals from Luiz Adriano, Palmeiras have started Group B with 6 points from 6 after impressive wins, 2-0 away against Tigre and 3-1 at home to Guaraní. While Verdão will face a pair of potentially tricky away trips once play resumes, they carry the momentum of a state league title into the resumption after defeating rivals Corinthians on penalties. Closing the group stage with a pair of home matches will have Vanderlei Luxumburgo’s side confident of going through.

🤩🇷🇺➡🇧🇷 Another look at Luiz Adriano's #Libertadores goals for @sepalmeiras_eng!

💪 Since joining from @fcsm_eng, he's found the back of the net 5 times for Verdão in the #Libertadores! pic.twitter.com/4DsrY3dstI — CONMEBOL Libertadores (@TheLibertadores) April 19, 2020

Guaraní displayed one of the most impressive performances of the opening phases of this Libertadores, knocking out Brazilian giants Corinthians (again) in São Paulo en route to a spot in the Group Stage. While their showing against Corinthains drew the headlines, their comprehensive aggregate win against Palestino, led by a pair of goals from MLS bound Rodney Redes, shows that this side has what it takes to put up a fight.

The Paraguayans will be relatively pleased with their start to proceedings, a comfortable 2-0 home win against Bolívar paired with their loss to Palmeiras in São Paulo leaves them right in the thick of the battle for a spot in the Round of 16. If they can manage to take all three points from their first match after the resumption, a home clash with bottom side Tigre they’ll surely feel confident in their ability to go through.

La Paz based Bolívar collected a 2-0 home win against Tigre while falling by the same scoreline away against Guaraní. So far, they’ve held serve in the thin air. If they can do so against Palmeiras when the competition resumes, as well as maybe pick something up on their travels (their September 22nd trip to Tigre might be their best shot), they can make some noise in this group.

It was always going to be tough in this group for Argentine second division side Tigre, who sit bottom of the group and yet to score, but they’ll take hope in the fact that they’ve already played two of their toughest Group Stage games in a home match against Palmeiras and a trip to the lung-bursting altitude of La Paz. While battling back won’t be easy, if they can manage to pick something up in their first two matches back, away to Guaraní and at home against Bolívar, they can at least fight for third place and a spot in the Sudamericana second round and with a bit of luck could even find themselves in the Round of 16 conversation.

Action in Group B resumes on September 16th as Palmeiras travel to La Paz to square off with Bolívar. The next night Tigre make the trip to Asunción to face off with Guaraní. 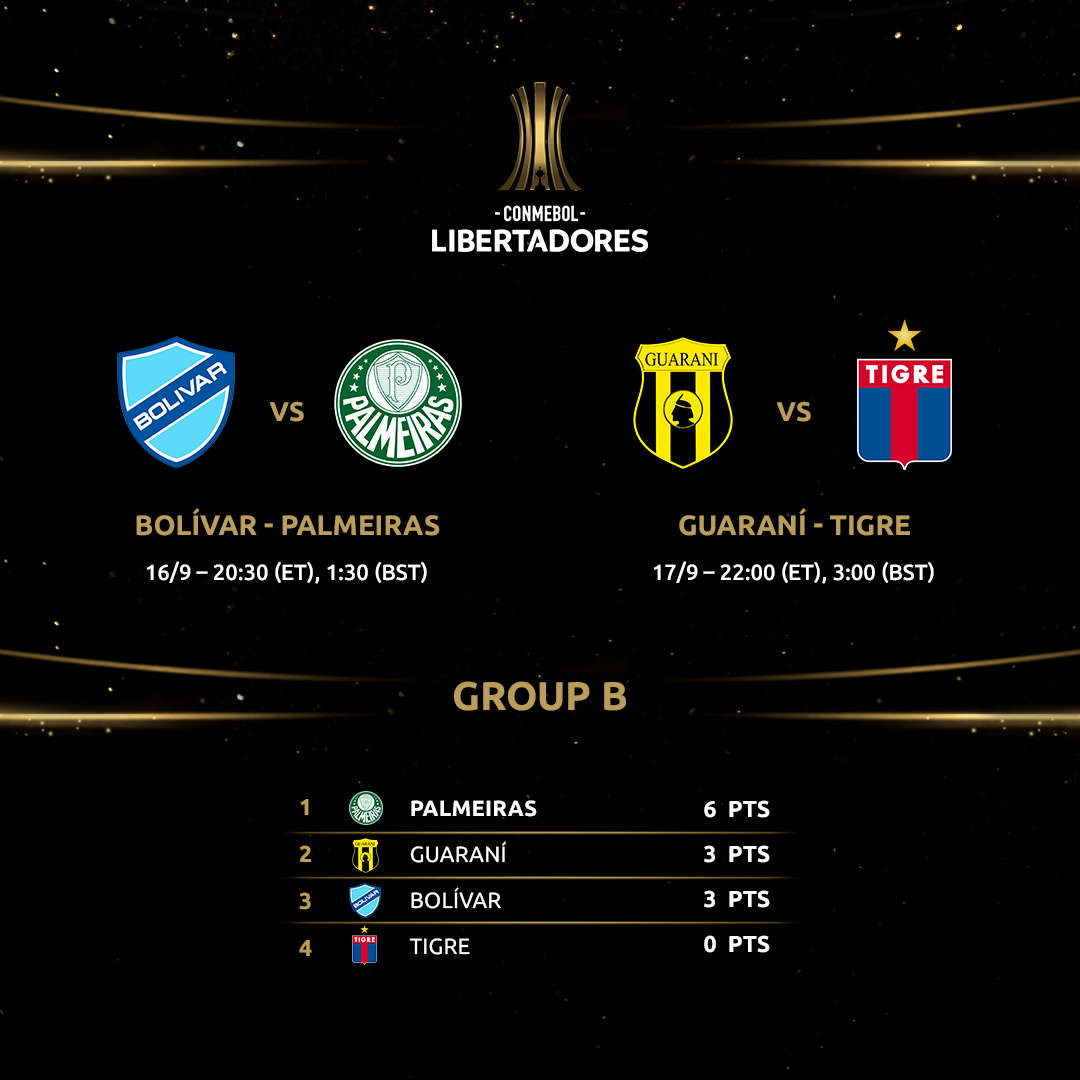