Austin Miller
09/09/2020
Brazilian side Santos lead the group with Paraguayan outfit Olimpia two points back while Delfín and Defensa y Justicia each hope to put on the pressure in the coming weeks.

Santos are no strangers to this competition and though they needed to shrug off a test to pick up three points in their first match, they sit on top of Group G with six points of a possible six.

Santos’ opening night trip to Libertadores debutantes Defensa y Justicia started with a first half stoppage time goal from the hosts to put them 1-0 up. Just when the Argentines started to dream of taking all three points, Santos struck with Jobson pulling the visitors level with 72 minutes played. Then, with time running down, Kaio Jorge scored again and the Brazilian side left Florencia Varela with a win.

⚫⚪🎥 @SantosFC_en rallied from a goal down to defeat @ClubDefensayJus tonight in both side's Group H opener! Highlights presented by @FTBSantander. pic.twitter.com/f1Gb6UYUmK

Santos’ second match was a more straightforward 1-0 victory against Delfín, making them a perfect two-for-two. A home match against Olimpia straightaway upon resumption of the competition gives new manager Cuca a chance to put some distance between his side and the rest of the group.

Olimpia have been the cream of the crop in Paraguay over the past few years and sitting on four points through two matches the Paraguayans are in good shape to advance out of the Libertadores group stage for the second straight year.

An opening night draw away against Delfín coupled with a 2-1 win over Defensa y Justicia that was more comfortable than the scoreline suggests has the Paraguayans sitting pretty, though the pandemic has put an end to Emmanual Adebayor’s brief time in Asunción.

Defending Ecuadorian champions Delfín battled back well to take a point against Olimpia in their first match of their third consecutive Libertadores appearance, though they will be disappointed not to have gotten a result against Santos on Matchday 2.

🇪🇨🇵🇾 @DelfinSC equalize to ensure points are shared in their home #Libertadores opener against @elClubOlimpia!

Resuming their action against Defensa y Justicia presents an opportunity for the Ecuadorians to take all three points and depending on what happens in Brazil, put themselves right back into the conversation in Group G.

Making their Libertadores debut was always going to be a challenge for Argentine side Defensa y Justicia though they can count themselves unlucky to sit on 0 points after two decent showings against Santos and Olimpia. Two consecutive home matches against Delfín and Olimpia after the resumption represent opportunities to get back into the conversation in Group G, but a lack of competitive matches since March could make the challenge that much more difficult. 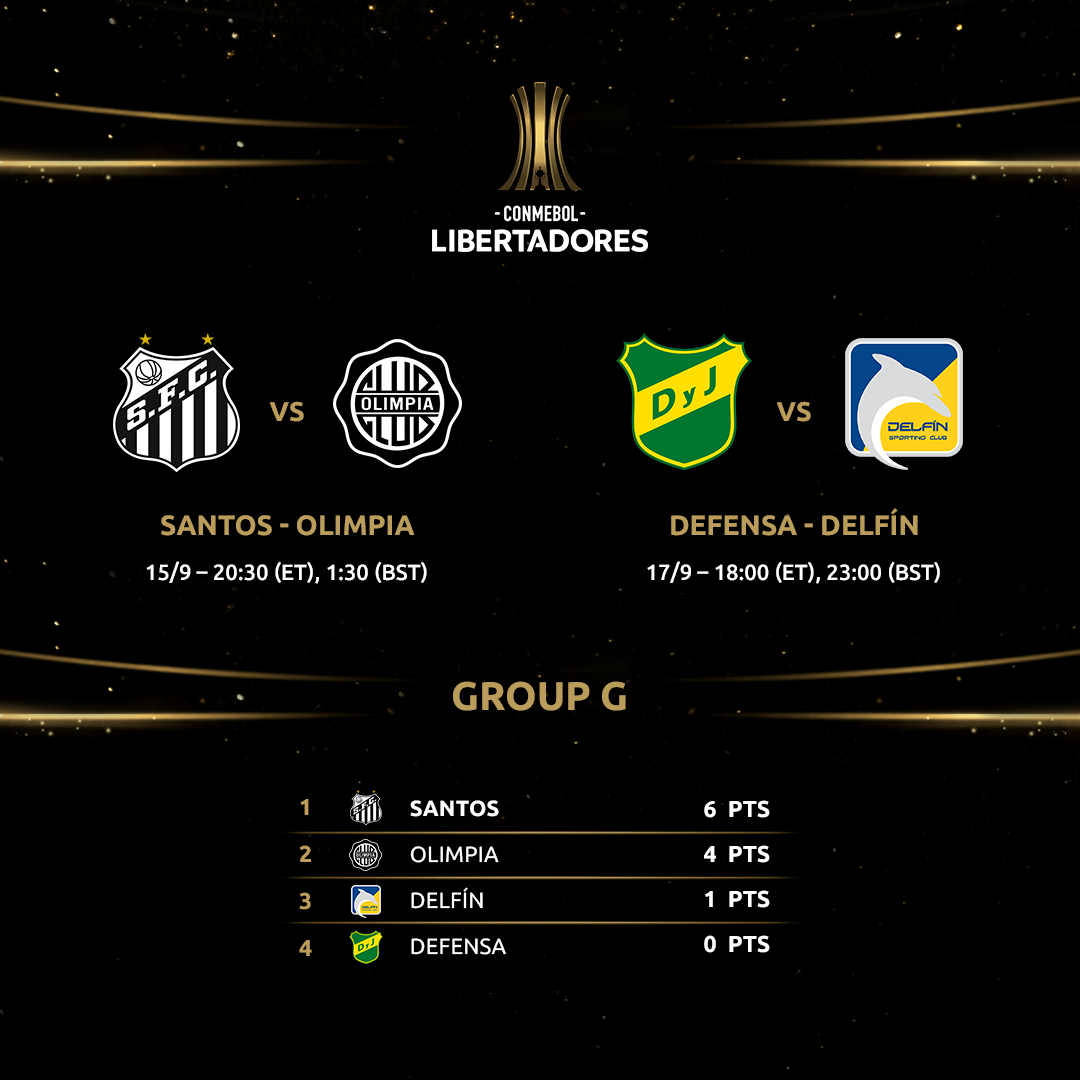