28/08/2020
Brazilian rivals Grêmio and Internacional draw the headlines, but América de Cali and Católica both still in position to strike.

The story with Group E from the start was the presence of fierce rivals Grêmio and Internacional, with the two meeting for the first time in the Libertadores in early March. That match was everything you’d expect from a true derby, finishing 0-0 with 8 total red cards handed out.

That point, coupled with impressive wins on the first matchday for each of the two sides, has the rivals atop the group on 4 points each.

Grêmio’s opening win was a 2-0 result away from home against América de Cali while Inter collected all three points from a 3-0 home win against defending Chilean champions Universidad Católica.

When the Libertadores resumes both sides will be without key figures. Inter’s Paolo Guerrero injured his knee, ruling him out for the rest of 2020, while Grêmio’s Everton was bought by Benfica during the mid-year transfer window.

While it looks as though the two Brazilian sides are on a collision course atop the group, it’s too early to count out each of the other two sides in Group E.

América de Cali have returned to the Libertadores after an 11 year absence, and though they were defeated on the occasion of their return, their ability to bounce back with a 2-1 away win against Católica on Matchday 2 shows that they’re capable of pouncing should Grêmio and Inter become too focused on each other.

All of the highlights of tonight's game presented by @FTBSantander as @AmericadeCali pick up an important away win against @cruzadosSADp in the #Libertadores! pic.twitter.com/qgzWRFjjB1 — CONMEBOL Libertadores (@TheLibertadores) March 11, 2020

Universidad Católica meanwhile were Chile’s most impressive side in 2019, but stumbled out of the blocks in the 2020 Libertadores, losing each of their first two matches. This is a talented side under an experienced manager in Ariel Holan. If he can get more from their dangerous attackers such as Edson Puch and Fernando Zampedri, Católica could yet rally and break into the Round of 16 conversation.

😍 All of the goals, highlights and all you need to know from Group E ahead of the #Libertadores resumption on September 15th!

Action resumes in Group E with América visiting Internacional and Católica hosting Grêmio. With Grêmio and Inter renewing their rivalry on Matchday 4, if América or Católica want to join the conversation for the top spots in the group, positive results upon resumption will be critical. For América, that might mean a point in Porto Alegre while for Católica that probably means all three points are needed against Grêmio. 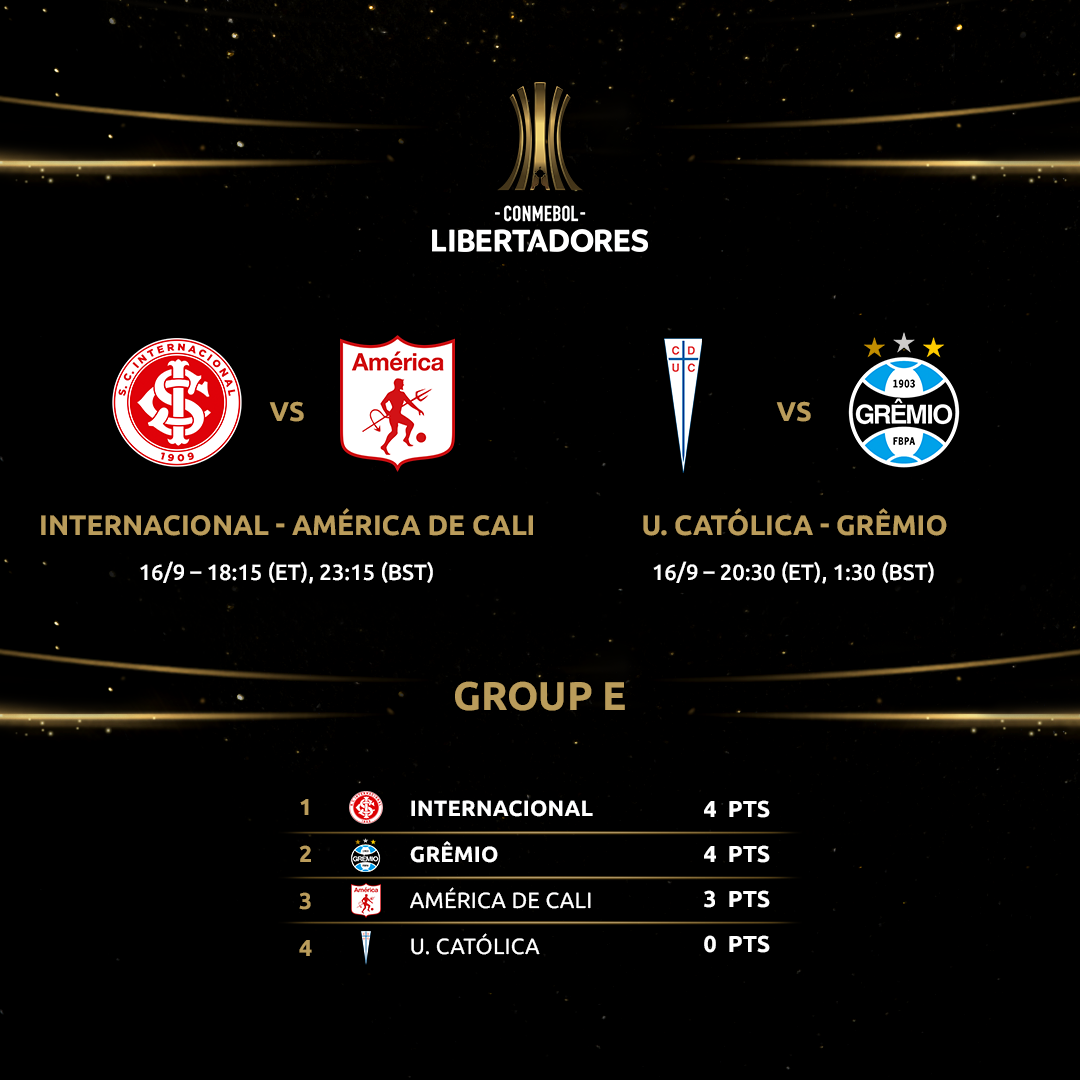