Austin Miller
14/08/2020
Featuring the defending Libertadores champions alongside the defending Sudamericana champions plus one of the hottest players of the opening rounds, Group A has been the playground of champions so far in 2020.

2019 Libertadores champions Flamengo picked up right where they left off as the 2020 Libertadores kicked off, winning 2-1 away against Junior before a comprehensive 3-0 victory against Barcelona ahead of the pause.

🤩🔴⚫🎥 Three's the magic number for @Flamengo! All of the best moments from yet another impressive showing from the defending champions, who tonight downed @BarcelonaSC 3-0 at the Maracanã! #Libertadores @FTBSantander pic.twitter.com/oyBYng48Kz — CONMEBOL Libertadores (@TheLibertadores) March 12, 2020

Torrent’s task of replacing one of most successful managers this continent has ever seen is no easy one, but his tactical naus will be appreciated by the Flamengo fans, even more so if his side can keep up their scintillating form in this competition. Torrent will have no fewer than 9 matches in charge of this Flamengo side before making his Libertadores debut, enough time to hopefully instill his desired style of play, though early results, a pair of losses in the league to Atlético Mineiro and Atlético Goianiense, show room for improvement.

Independiente del Valle won the 2019 Sudamericana and looked as though they’d carried that form into 2020 as well, recording a pair of impressive 3-0 wins against Barcelona and Junior in the first two group stage matches. That they managed to get six goals from six different players in those matches is a testament to the overall depth possessed by this team who have quickly secured their spot among teams to watch in this tournament.

Ecuadorian side Barcelona looked to be a threat in this group after their rampage through the opening stages saw them outscore opponents 15-3. Fidel Martínez was a big part of that success, scoring 8 times in his first 6 matches of the 2020 Libertadores. Barcelona will look to reset after the pause and regain the form they showed early on in the competition to have a fighting chance to advance from this group.

Junior meanwhile found the going tough in their first two group stage matches, but will hope that their veteran attack pairing of Teó Gutiérrez and Miguel Borja can find the back of the net consistently upon the resumption of the competition.

😍 Get caught up on all of the best action from Group A of the 2020 #Libertadores as the competition gets set to resume on September 15th!

The first night of action after the resumption in this group should be tasty with Independiente del Valle hosting Flamengo and Junior travelling to face Barcelona. The matchup between the two champions is a rematch of their entertaining Recopa Sudamericana clash, won by Flamengo 5-2 on aggregate, though the first leg in Quito finished 2-2. In Guayaquil, Barcelona and Junior will both surely understand the need for all three points in their respective quests to close the gap on the two group leaders. 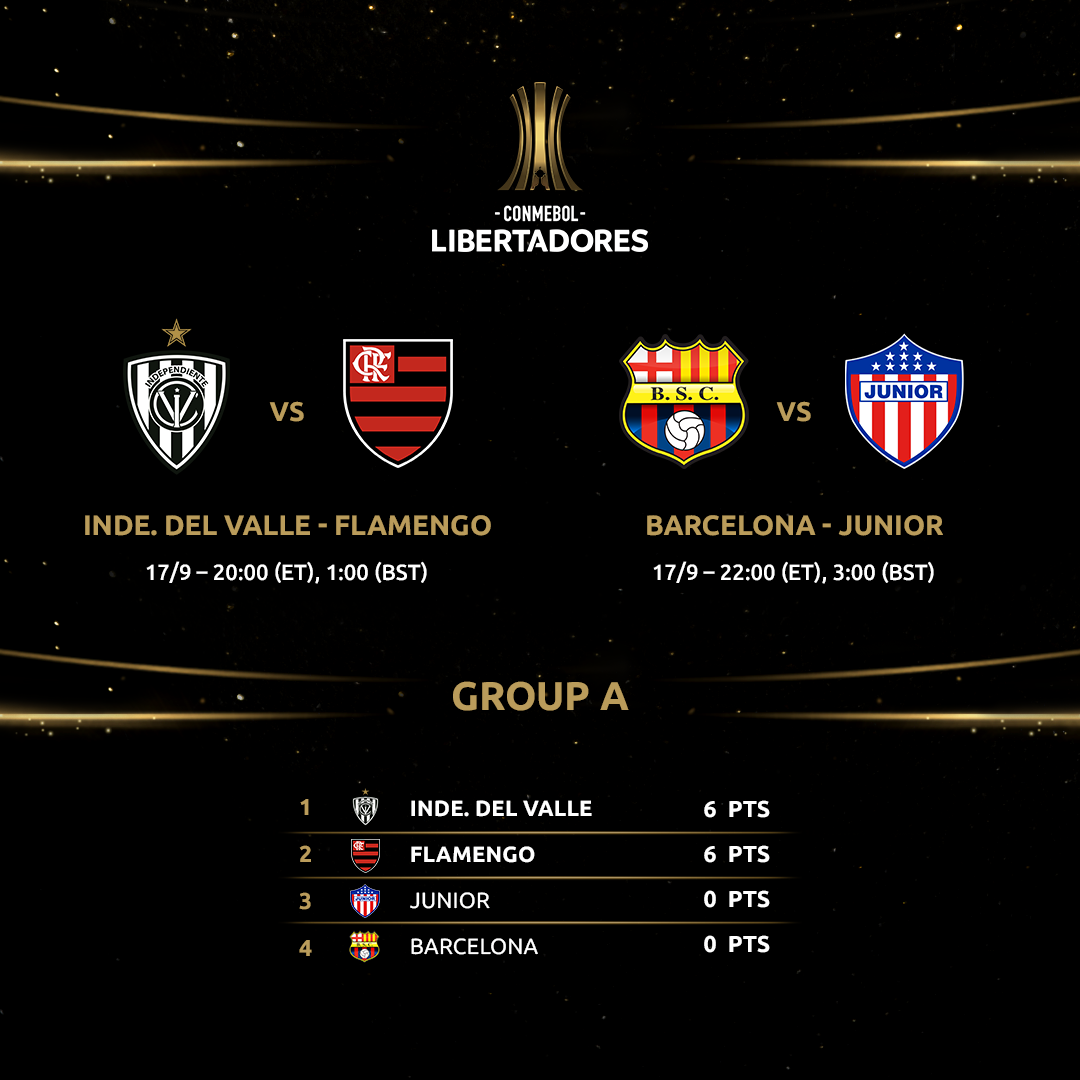