06/03/2019
AFP
In an exclusive interview, the title-winning goalkeeper of 2013 cautions about the dangers of the Libertadores, and speaks of a stronger Atlético Mineiro ahead of their Group Stage Debut

The surviviors of a pair of CONMEBOL Libertadores play-off round ties, Brazilian side Atlético Mineiro debut in the group stage tonight against Cerro Porteño (PAR). In 2013, goalkeeper Victor was a key part of Atlético Mineiro's run to a Libertadores title, now he's set to give his perspective on the current Mineiro side ahead of their group stage opener.

In this exclusive interview with Copalibertadores.com, Victor paints a picture of Atlético's intense preparation, and says why Galo fans can dream of a second Libertadores title. At 36, the goalkeeper nears his 400th match in an Atlético Mineiro shirt, he's played 393 already, including 45 in the Libertadores.

How do you feel coming into yet another Copa Libertadores?

I'm very motivated, happy to be back in the competition aftter missing out in 2018. It always makes me very happy, the best names in South American football play in this competition, it's very gratifying to be back. 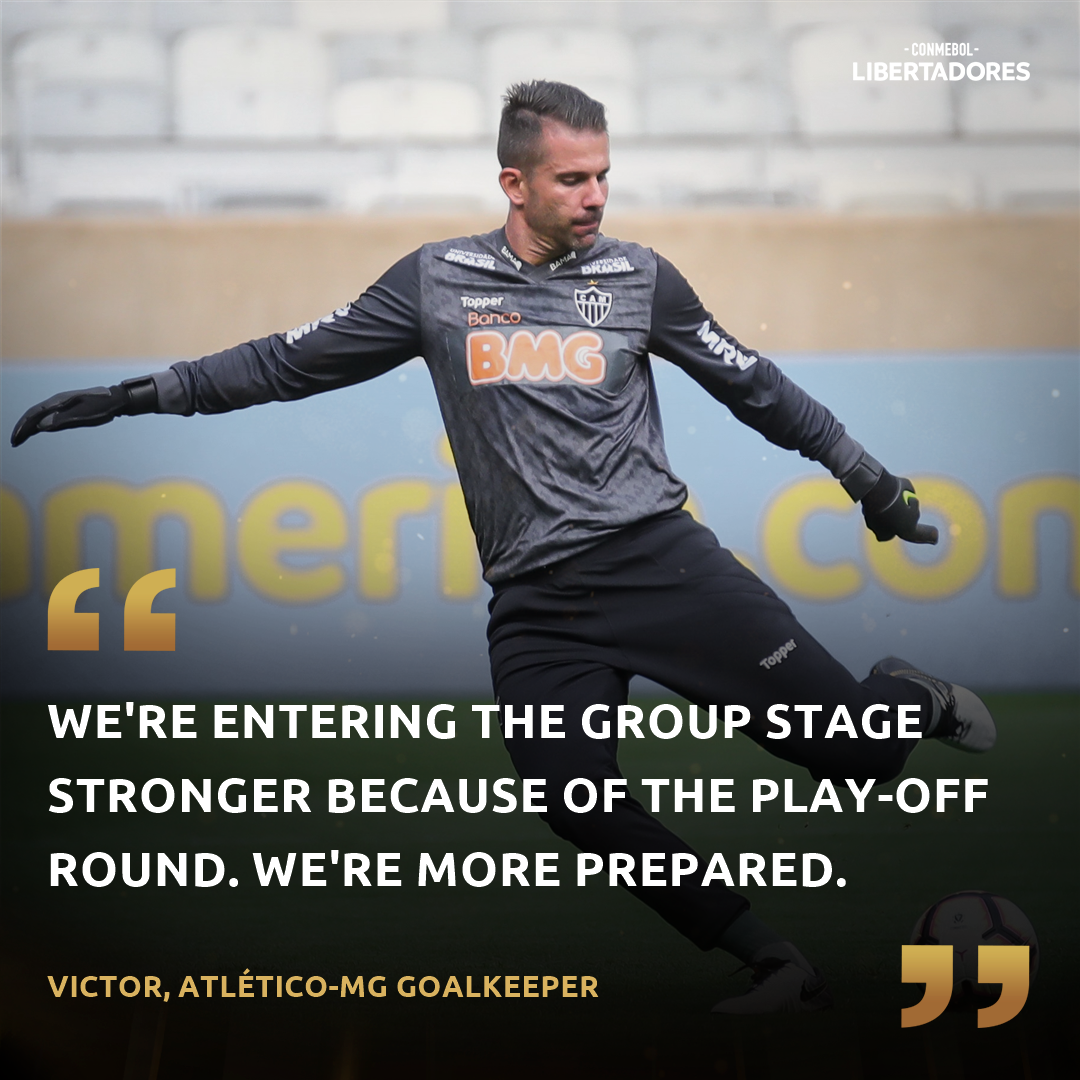 Are you ready to be, as the fans call you, "Saint Victor" again?

Of course people dream of doing those sorts of things, but fotoball is a collective sport. Everyone has their role, I hope it all works out, that maybe I don't have to make as many massive saves.

What lessons do you take from the play-off rounds? You said that the matches were very taxing mentally.

It's very difficult to come through the play-off rounds. The emotional aspect is very heavy, everyone knows the importance of competing in the Libertadores, and if you're eliminated before the group stage, then you're already in a crisis. We're entering the group stage stronger because of the play-off round. We're more prepared. But we have to prepare even more, we've got a difficult group.

What would you say are the main dangers of this competition?

Everyone knows that this is a competition with the best of every country. Every detail could make the difference. Every team from every country has a style that is different. It's important to know how to adapt to each style. We have to always be attentive. Things like altitude, you have to be prepared for everything.

What then is the style of Atlético?

We always play on the front foot, a team of possession. We like to play with the ball, always looking to build attacks in the offensive half. And also we're very physical, because the Libertadores demands that of you. You have to play a physical style in this competition.

What do you make of the group with Cerro Porteño, Nacional (URU), and Zamora (VEN)? What is the biggest challenge?

It's a tough group. You've got some traditional teams. About Zamora, Venezuelan football is growing, tons of fans. We know the difficulties, but we also know what we're capable of.

Are there similarities between this team and the team that won the title in 2013?

Every team, every group has its own qualities. What we've got in common is the technical quality, the ability of our players to show up and decide matches.

You're close to completing 400 matches with the club. What does that number mean to you?

For me, it's a very important mark, I'm incredibly proud. Our game is full of changes, to spend just a few years with a team. 400 matches represents for me something very positive. Players change all the time and don't create this type of legacy with a club. I hope that I'm not only hitting numbers, but meeting goals too.

Your team has you, the return of Réver, who captained that 2013 squad, and Ricardo Oliveira, two times a finalist in this competition. How can that exerperience help this group and make a difference?

This is a competition where experience counts for a lit. It's fundamental to have that. It helps motivate, prepare, and just lead. It's important.

What does the future hold for you? How much longer are you planning on playing?

At 36, I can't really make plans for the extended future. I have to consider everything day by day. I'm motivated, I feel great physically, able to still win titles. I'm motivated, happy. If i was to retire an Atlético player, for me, that'd be a huge honor.

tWhat's your favorite Libertadores memory? It has to be the penalty save against Tijuana in the 2013 Quarterfinals, right?

I think it's unquestionably that penalty save against Tijuana. That's what has always stuck with me most. But the Olimpia penalty that hit the post sticks with me too.

That save against Tijuana gets mentioned even still today. How is that day to day, are people still asking about it?

It's stamped in the history of the club, in the memories of the fans, and becasue of that it gets brought up nearly daily. I know what it representes, we get to live thius and understand the passion of the fans. It's gratifying.