With just one matchday left in the CONMEBOL Libertadores Group Stage, 11 sides have already secured their spot in the Round of 16, though only two, Santos and Boca Juniors, have already locked up the top spot in their respective groups. That leaves 5 tickets to Friday’s draw ceremony and plenty of more jockeying to come between the sides in the hope of ending up in the Group Winner’s Pot come Friday afternoon.

Before the drama begins tomorrow night, we take a look at all of the potential qualifying scenarios in each of the eight groups.

A quick reminder that groups are settled first by points, then by goal differential, then goals for and finally by goals scored away from home. If two sides are still tied, the CONMEBOL Ranking as of December 2019 determines who advances.

As well, viewers around the world can follow the Libertadores in English like never before thanks to a host of official broadcast partners.

Flamengo have advanced and need to collect just a point at home against Junior in order to win the group.

Independiente del Valle can finish no lower than third and will advance with a win or draw against Barcelona. IDV can win the group if they defeat Barcelona and Flamengo lose to Junior.

Junior will need to defeat Flamengo, Barcelona to defeat Independiente del Valle, and overturn their goal differential with the Ecuadorians (currently a 6-goal gap) in order to advance.

Barcelona have been eliminated from the Libertadores but can still qualify for the Sudamericana with a win, Junior loss, and if they manage to pass the Colombians on goal differential. 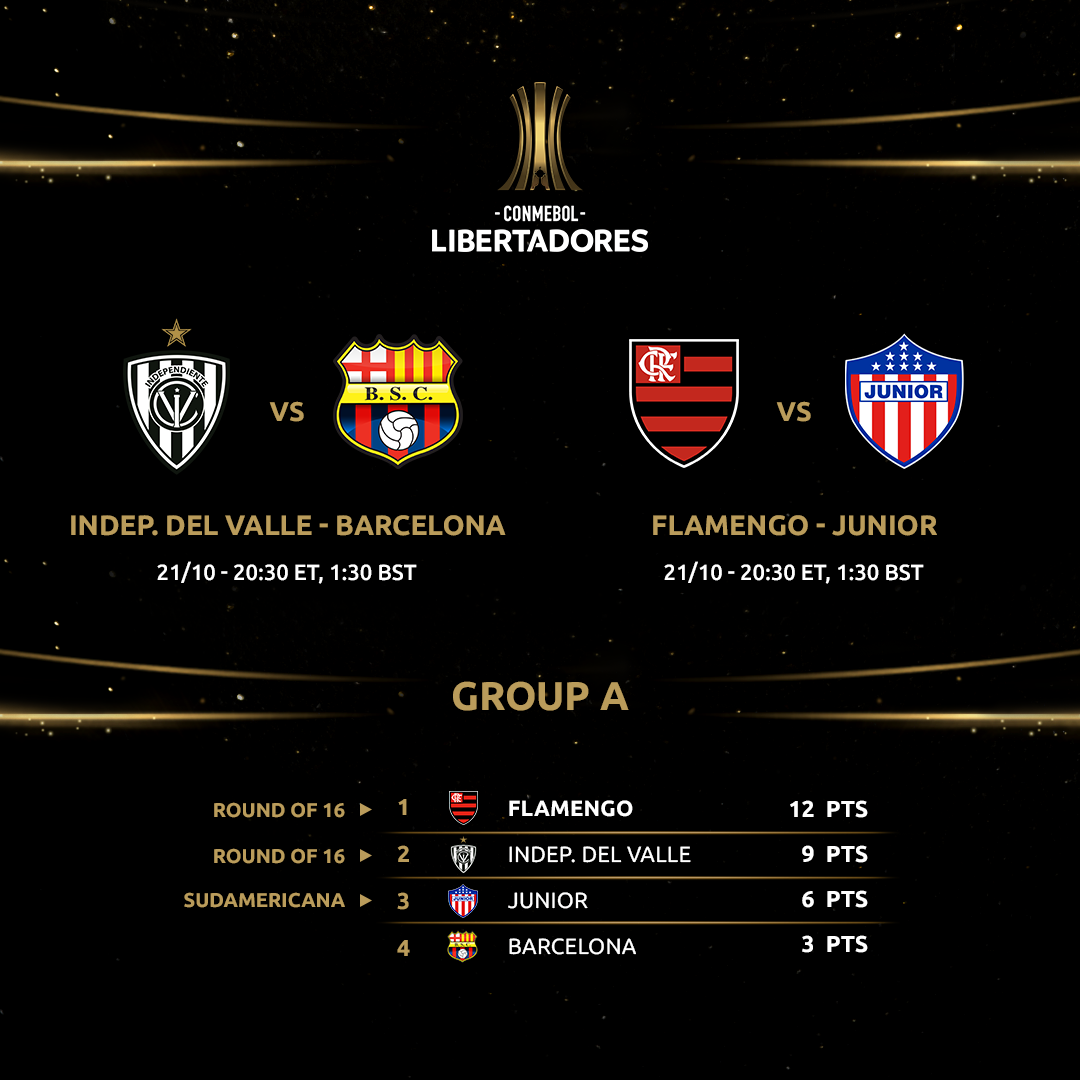 Palmeiras and Guaraní have both advanced to the Round of 16. The Brazilians will win the group with a draw or win at home against Tigre. Guaraní will need a win in La Paz against Bolívar, a Palmeiras loss to Tigre, and to catch the Brazilians on goal differential (currently +10 to +5) if they’re to finish first in the group.

Bolívar will qualify for the Sudamericana with a point at home against Guaraní or if Tigre fail to beat Palmeiras in São Paulo. The Argentines need to win in Brazil against Palmeiras and for Bolívar to lose at home agianst Guaraní and to catch the Bolivians on goal differential to advance to the Sudamericna. 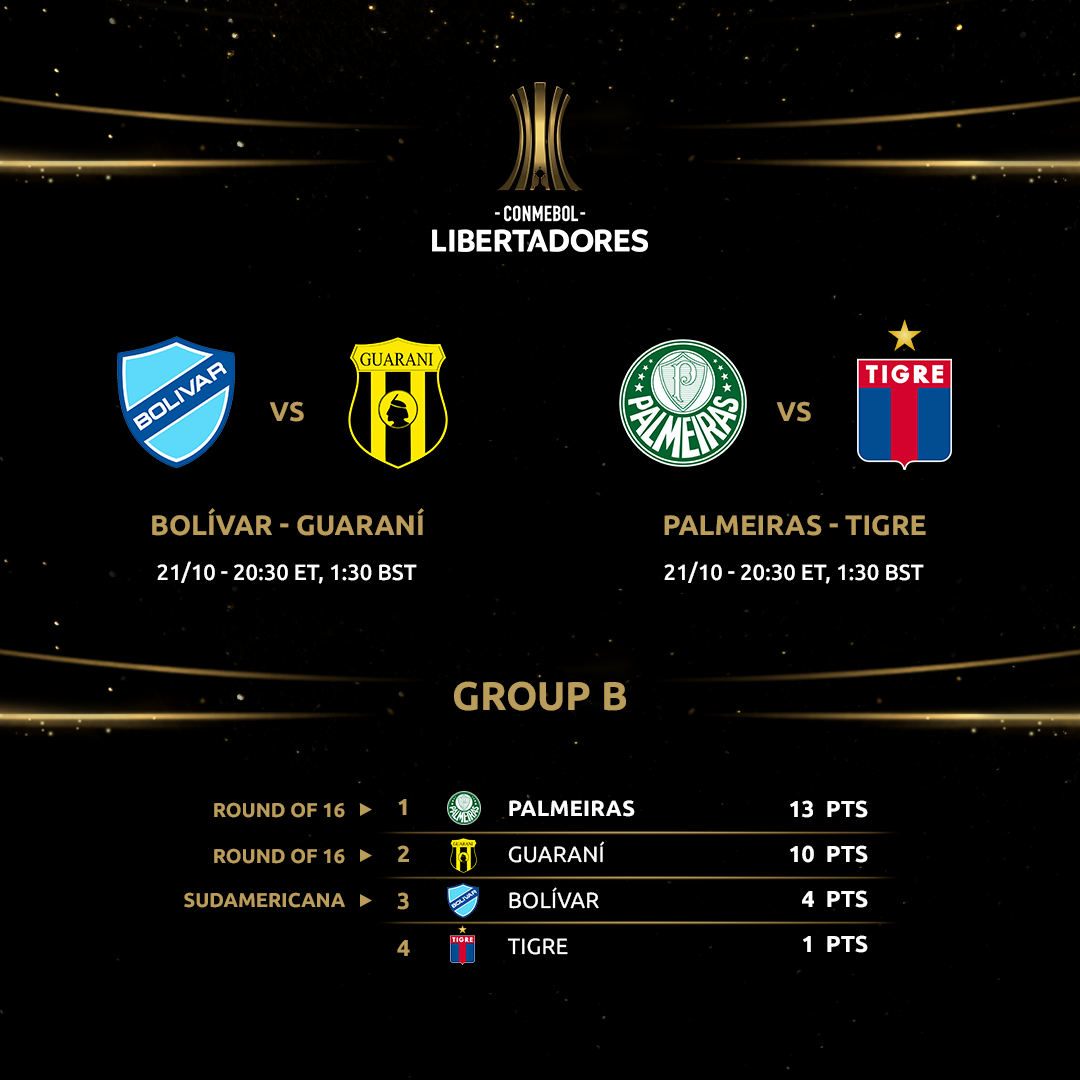 Group C is one of just two groups where all four teams have either advanced or have a chance to advance on Matchday 6. Athletico Paranaense have advanced and will secure the top spot in the group with either a win or draw in Montevideo against Peñarol, or if Jorge Wilstermann fail to defeat Colo-Colo.

Jorge Wilstermann currently sit second place and control their own destiny. If they win in Santiago against Colo-Colo, they advance regardless of any other result in Montevideo, and could still win the group if Athletico lose to Peñarol. Wilstermann can also advance with a draw in Santiago if Peñarol fail to defeat Athletico.

Peñarol are currently in third place, and their goal differential may give them the inside track on Colo-Colo. The Uruguayans however, do not control their own destiny. Peñarol must win in order to advance, but will also need Wilstermann to drop points against Colo-Colo. A Peñarol win and a draw between the Bolivians and Chileans will send Peñarol to the Round of 16. A Peñarol win and a Colo-Colo win will send the Uruguayans through as long as Colo-Colo don’t erase the five goals of goal differential that currently separate the two sides.

Colo-Colo, like Peñarol, must win to have a chance at advancing. A Colo-Colo win coupled with Peñarol failing to defeat Athletico would send the Chileans into the Round of 16. If Colo-Colo and Peñarol both win, the Chileans must erase the goal differential gap between the two sides in order to advance. 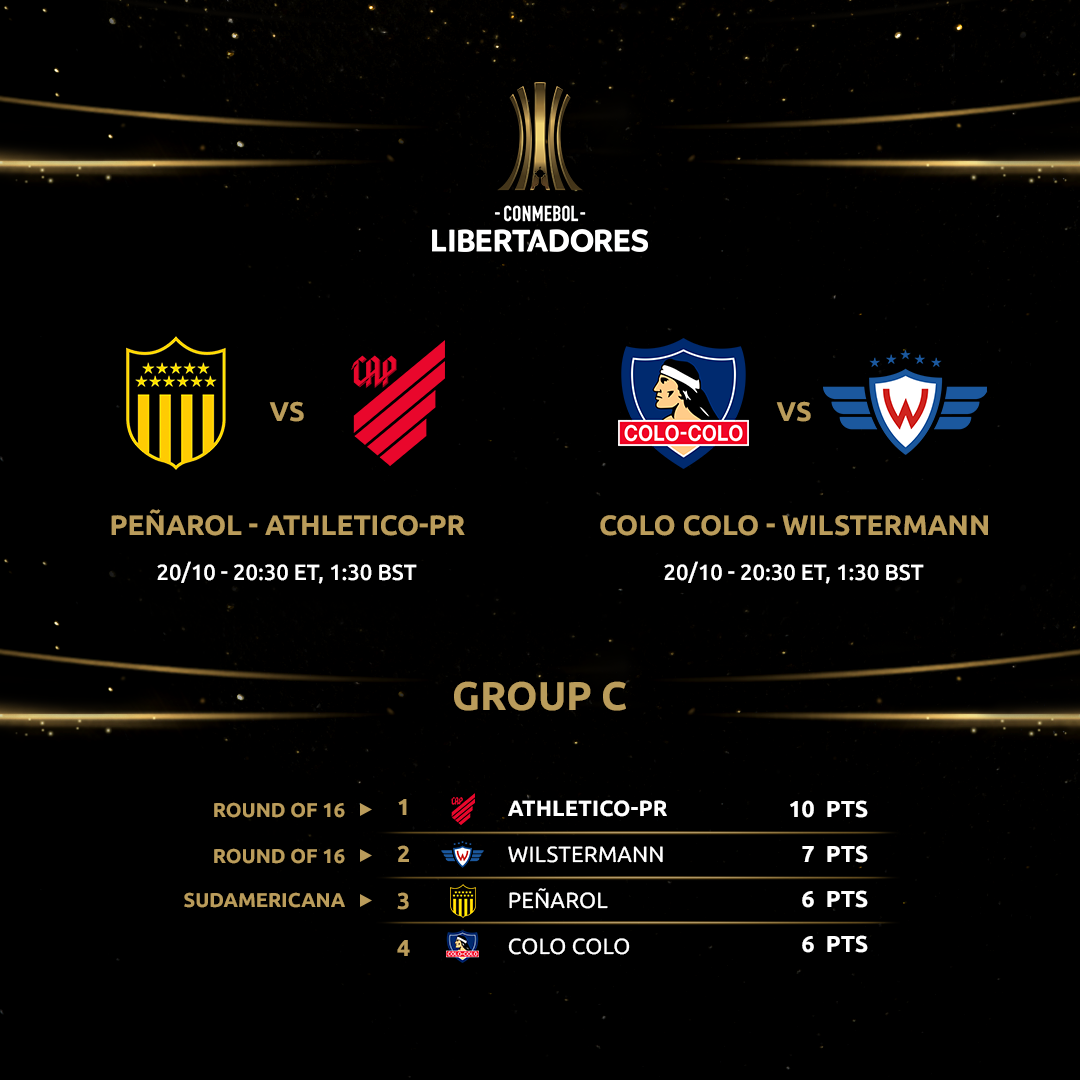 Things are much more straightforward in Group D. Liga de Quito and River Plate have both advanced to the Round of 16 and meet this week to determine the top spot in the group. If River win, they’ll top the group, while Liga de Quito take the top spot with a win or draw.

São Paulo and Binacional have both been eliminated from the Libertadores but can both advance to the Sudamericana. São Paulo will finish in third place and qualify with a win or draw, while the Peruvians must win to keep their dreams of continental glory in 2020 alive. 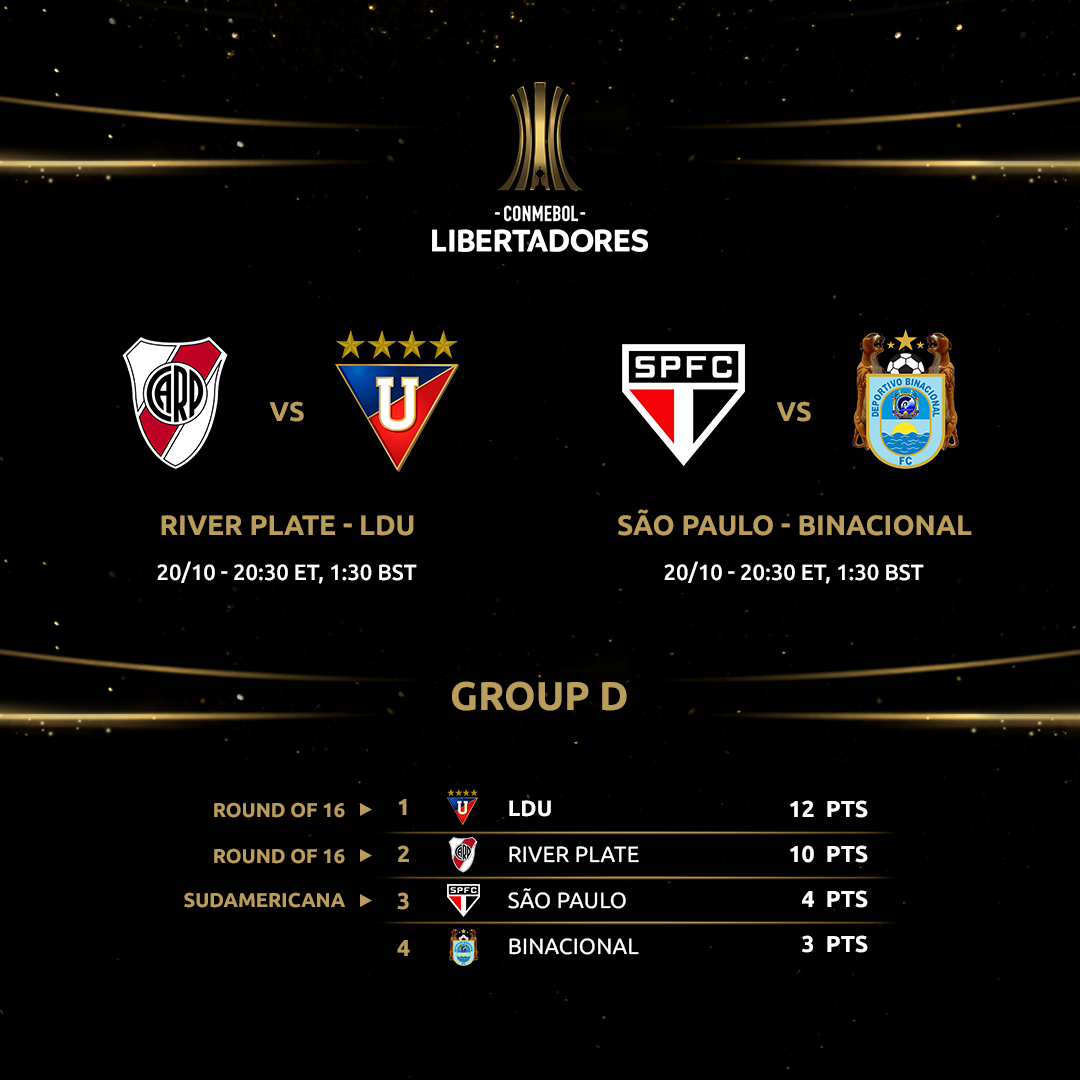 Grêmio are the only side in Group E that are certain of advancing. The Brazilians will win the group if they win against América de Cali this week or if Internacional fail to defeat Universidad Católica.

Internacional will join their Porto Alegre rivals (and set up the possibility of another Libertadores Gre-Nal…) in the Round of 16 draw if they collect a point or better against Católica or if América de Cali fail to beat Grêmio. If América de Cali defeat Grêmio, Inter are only eliminated if they lose and the Colombians manage to overturn the goal differential gap (currently +2 to -3).

América de Cali are still alive but only just. The Colombians must win in Brazil against Grêmio and must see Inter lose in Chile against Universidad Católica. If that happens, it will come down to goal differential. If the Colombians manage to overturn it (or finish level and score more goals overall), they’ll sneak into the Round of 16.

Universidad Católica have been eliminated from the Libertadores but can qualify for the Sudamericana by finishing ahead of América de Cali. To do that, they’ll need either a point and a crushing loss for the Colombians in Brazil, or a win and for the Colombians to lose or draw. 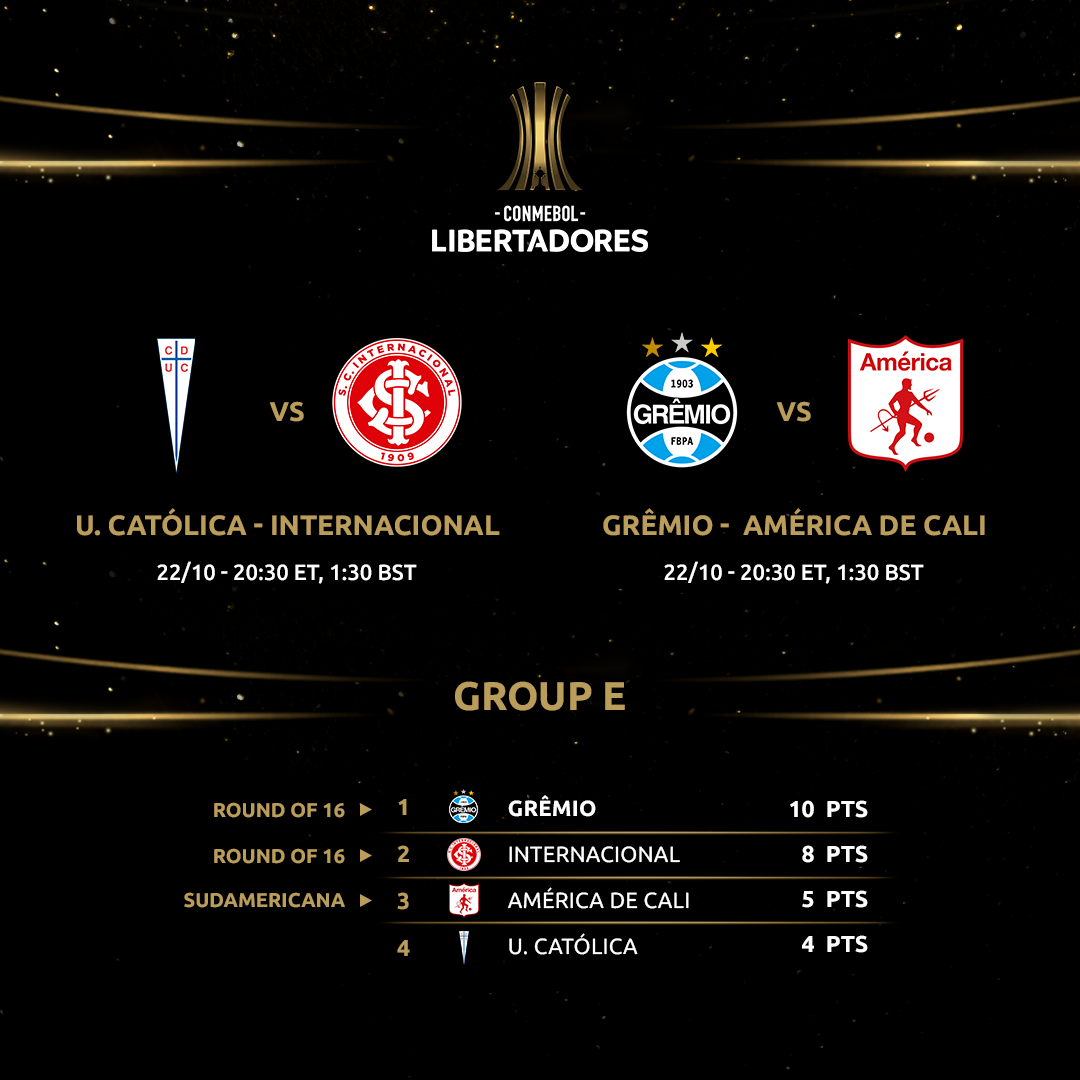 Racing and Nacional are level atop Group F with 12 points and a +4 goal differential each. Racing currently top the group by virtue of having scored more away goals, six to five. That means that if both sides draw their final matches, which are each at home, with the same scoreline Racing will top the group. Nacional must pass the Argentines on points, or goal differential or goals scored if they finish level on points, to finish first. It’s a complicated situation but both sides can be sure that no matter what happens they’ll be involved in Friday’s draw.

Estudiantes de Mérida and Alianza Lima are both eliminated from the Libertadores but each still have hopes of moving on to the Sudamericana. The Venezuelans will take the Sudamericana spot if they pick up a point or better against Racing or if Alianza Lima fail to defeat Nacional. The Peruvians will need their first Libertadores win in over 20 attempts against Nacional to have any chance of advancing. They’d also need Estudiantes to lose and to overturn the goal differential of the two sides. 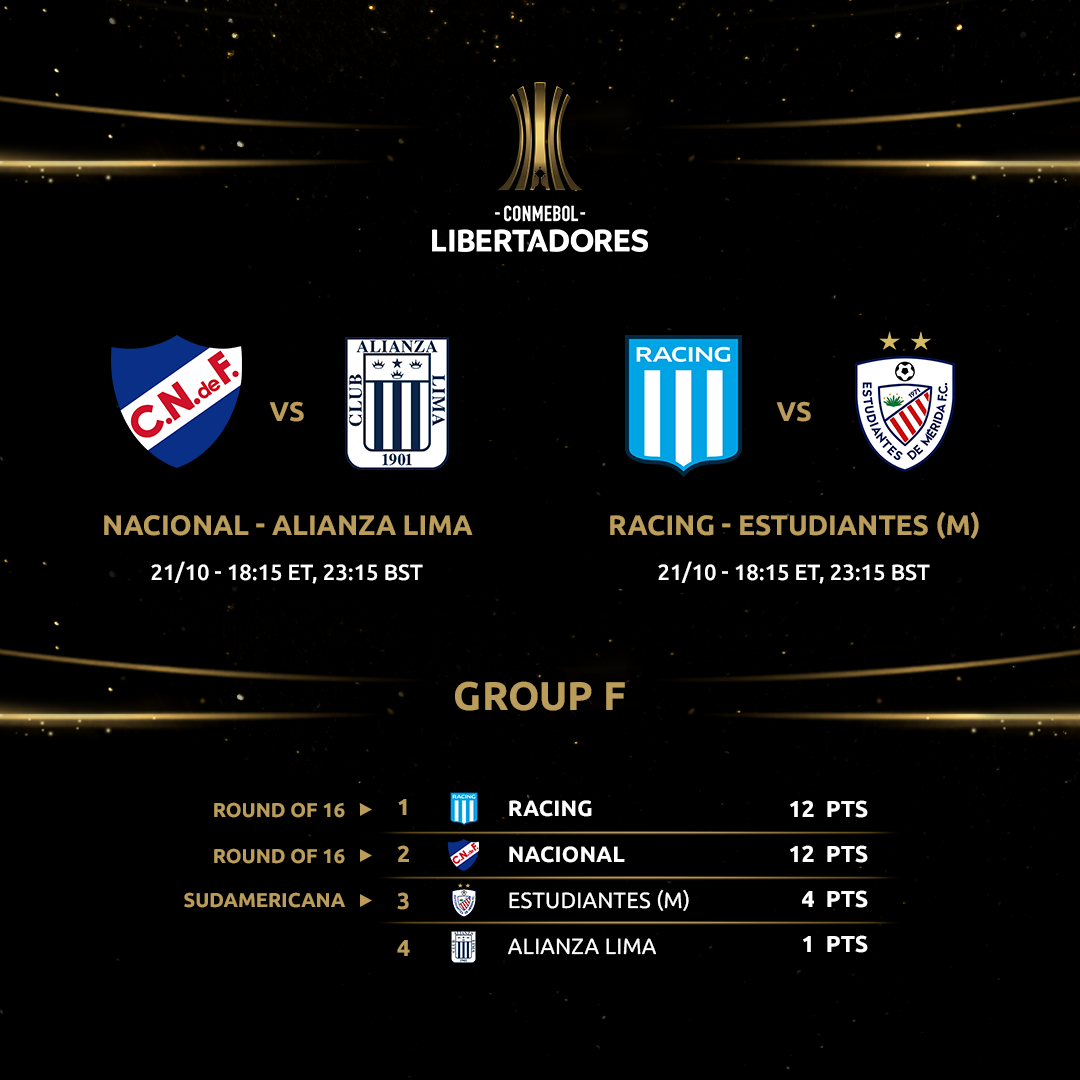 An impressive campaign has seen Santos top this group with a match to spare but the battle for second place is sure to be an intriguing one on the final matchday.

Defensa y Justicia are in the driver’s seat for second place. If they win away from home against Santos on Tuesday night, nothing else matters, they’re through to the Round of 16. If they lose, they’re out as they’d be guaranteed to be passed by either Olimpia or Delfín. A draw would leave them needing either a draw between Olimpia and Delfín or for Delfín to win but fail to pass them on goals scored. 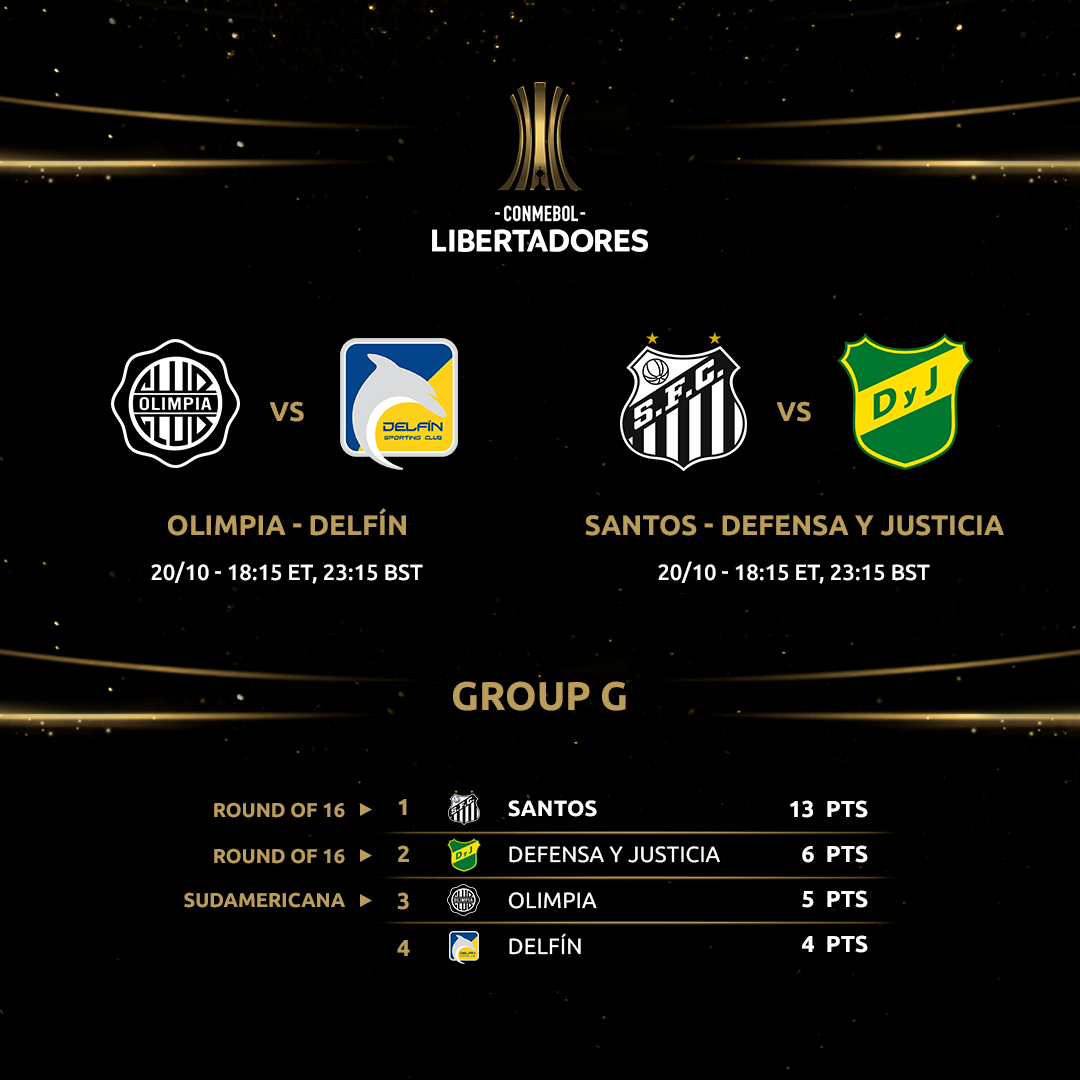 Boca Juniors have secured their spot atop the group while Independiente Medellín have been eliminated from the Libertadores and won't advance to the Sudamericana regardless of their result.

Caracas and Libertad each have 7 points and a -1 goal differential. The Venezuelan side have scored 8 goals while the Paraguayans have scored just 6, giving Caracas the slightest of edges going into the night. Because of the situation, neither team completely controls their own destiny. If they win, they could be passed by a win and a bundle of goals by the other side. If they lose, they could still finish above the other side on goal differential. If either side achieves a better result, they’re through, but the drama is sure to continue right up to the final whistle on Thursday night. 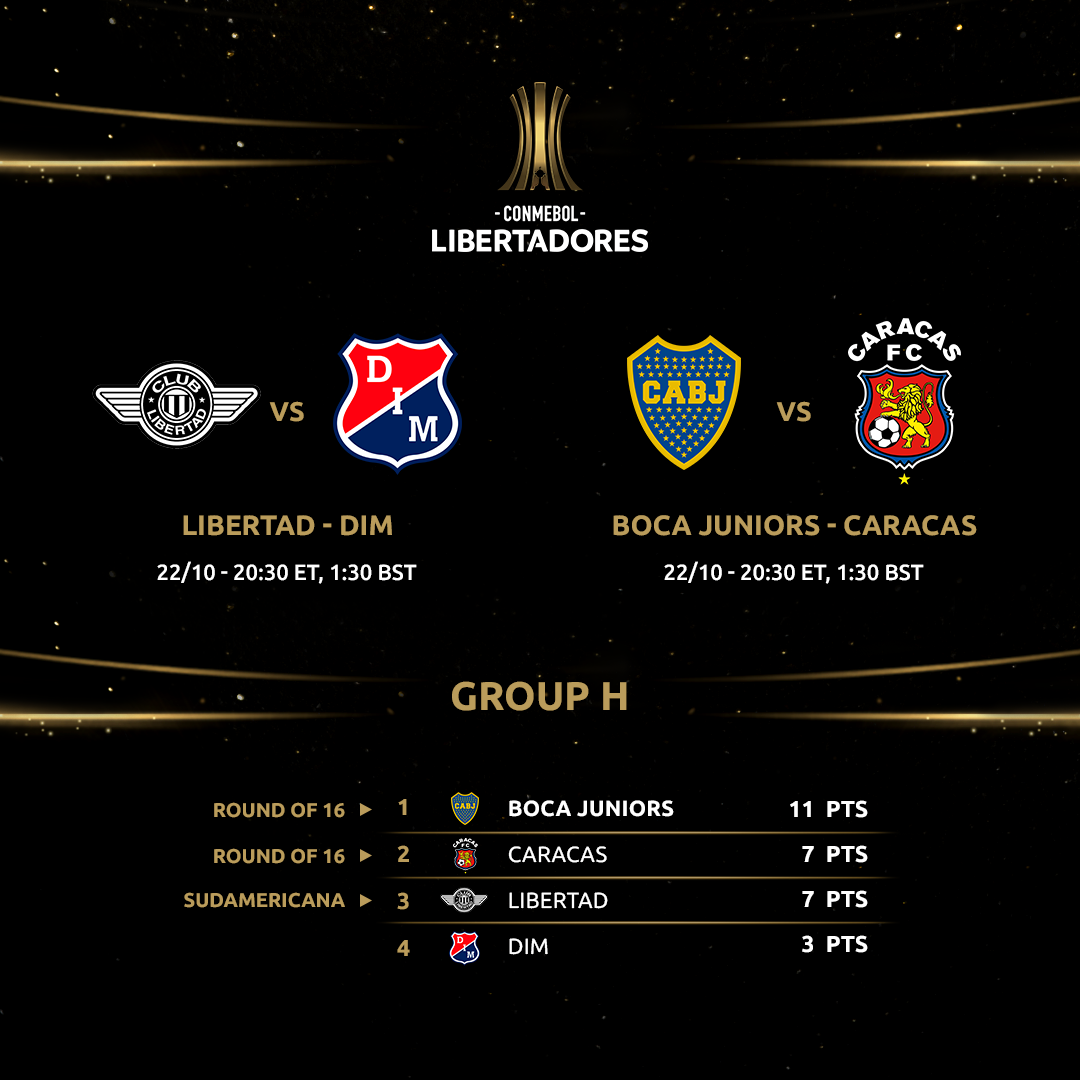 All of the 16 sides that advance, plus the 8 that drop into the Sudamericana, will be tuned in on Friday as CONMEBOL conducts the draw for the Libertadores Round of 16 and the Sudamericana Second Round.
Comments ()
Close