Waldemar Victorino scored 6 goals in the 1980 Libertadores and was the competition's top scorer. His tally in the final was undoubtedly the most important, leading Nacional to their second ever Libertadores title. 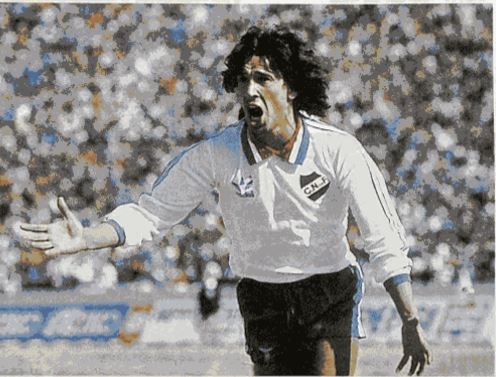 Nacional's campaign started in Group 2 alongside fellow Uruguayans Defensor Sporting and The Strongest and Oriente Petrolero of Bolivia. Nacional won 5 of their 6 group stage matches, qualifying for the semifinals with ease.

In the semifinal Group of three, Nacional featured alongside Olimpia and O'Higgins of Chile. Again, Nacional topped the group with relative ease, winning three of their four matches, picking up a point in the other for an undefeated run.

Brazilian side Internacional awaited in the Final. The first leg in Porto Alegre was hard fought, finishing goalless, leaving everything to play for in Montevideo. The second leg was much like the first: tense. The breakthrough came with 35 minutes played, Victorino finding the back of the net with what would prove to be the difference.

Manager Juan Martín Mujica was a Nacional man through and through. Born in a small town where everyone was a supporter of either Nacional or their rivals Peñarol, he was raised in a Nacional family and joined the club after a spell with Rampla Juniors. Mujica achieved Glória Eterna not just as a manager, but also as a player with Nacional, an impressive feat that lives forever in the Libertadores history books.