Robbie Blkeley
21/08/2019
AFP
On a cold night in Porto Alegre, Palmeiras emerged with a 1-0 win. They take their advantage to the Allianz Parque next week. 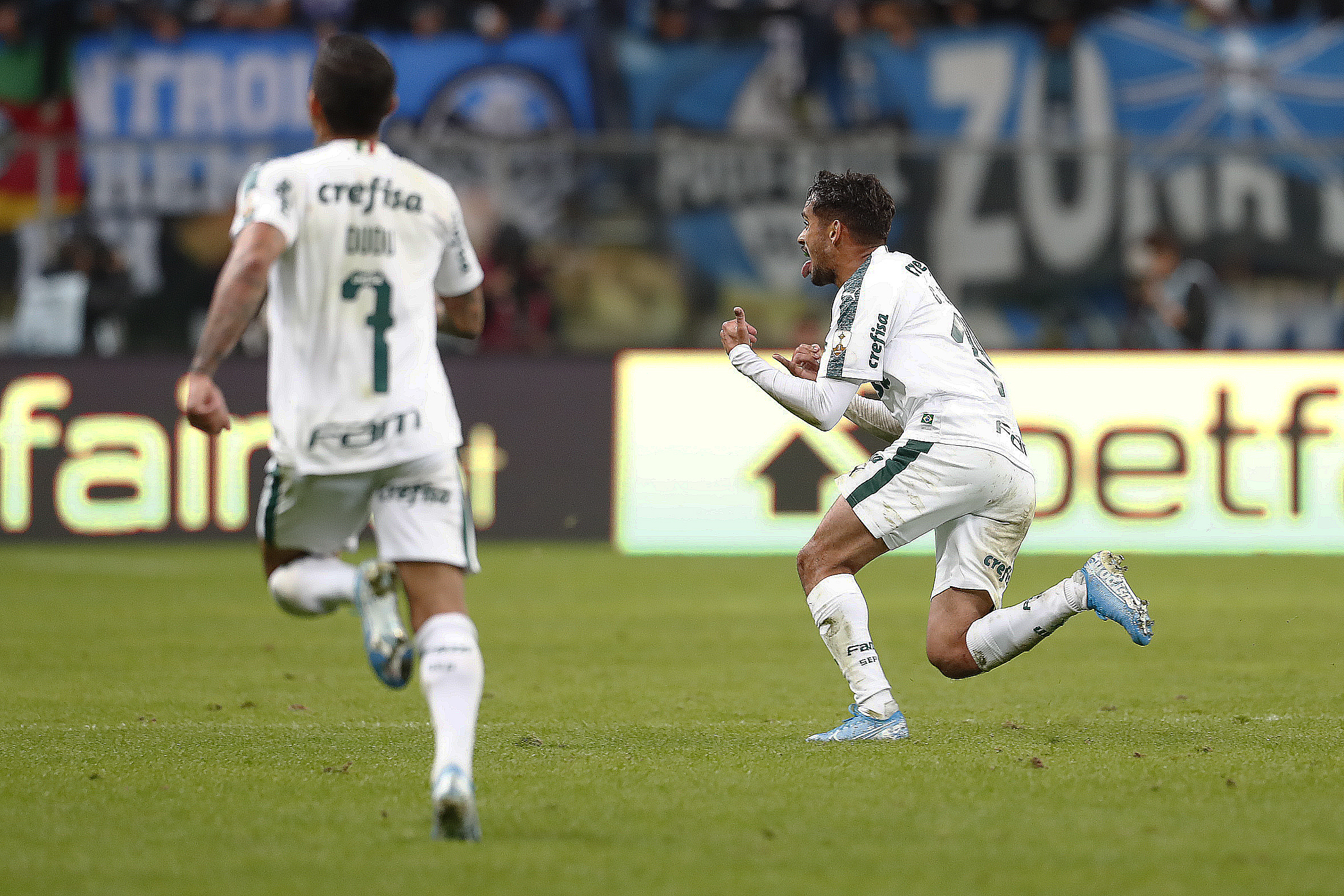 The player sized up the opportunity, even from that incredible distance. The man between the sticks patrolled his domain, serene, quietly confident that nothing – at this point, at the very least, would pass.

The ball was touched gently to the side, and his mind was made up. Despite the lengthy path towards goal, all 35 metres of it, he was going to shoot directly, clean and crisp. Certain in his mind, he ran up and struck with force.

The goalkeeper could see what was coming. Prepared, he set himself ready for the effort, fully expecting to be equal to anything his opponent could muster.

The ball was struck cleanly, powerfully, and sailed towards goal with purpose. Arguably just a nanosecond too late, the man on the line realised the danger was genuine. He leapt, his fingers outstretched, in an ultimately futile attempt to protect the net.

The swerving shot beat his fingers, hitting the frame of the goal before nestling comfortably in the back of the goal. The deadline was broken. The game was won.

The man behind the strike was Gustavo Scarpa, the man between the goalposts Paulo Victor, and at the Arena do Grêmio, on a cold and scrappy night in Porto Alegre, this was the scene which ultimately decided this Copa Libertadores quarter-final, first leg tie: Grêmio 0-1 Palmeiras.

This contest is unlikely to go down in the annals of time as un unforgettable classic, but to Luiz Felipe Scolari and his Palmeiras players, that will not matter one jot. On a night when their defence shone and they netted a crucial away goal, the 2002 World Cup winner now knows that he has the firm advantage ahead of the return encounter next week.

For Renato Gaúcho and his Grêmio side, this tie is far from lost however. The 2017 Libertadores champions have an abundance of attacking talent at their disposal and an early goal at the Allianz Parque in the second leg puts them on level terms, both in the tie as well as away goals; despite this setback, it very much remains aall to play for in São Paulo.

But in front of their own fans this turned into a night of frustration for the home team. Despite the numerical advantage in the final stages after Felipe Melo had been given his marching orders 12 minutes from time for a second bookable offence for the visitors, Grêmio still could not find a way through a dogged and determined Palmeiras back line, try as they might.

Grêmio huffed and they puffed, but they simply could not blow the Palmeiras house down. This first leg tie at times resembled a chess match, and it may well play to Grêmio’s attacking strengths to go more direct in the second leg, away from the pressures of a home crowd and knowing exactly what they need to.

At this stage of an elite level club competition, the margins between victory and defeat are fine. This was a contest between two of the biggest sides currently not only in Brazil, but on the continent, and there was a certain feel to the opening exchanges of the two sets of players feeling each other out, stoking the fires ahead of the explosives.

🚀⚽ Gustavo Scarpa's rocket with the reaction from the @Palmeiras supporters in the away end! pic.twitter.com/kroeXV6v2x — CONMEBOL Libertadores (@TheLibertadores) August 21, 2019

Palmeiras can now play for a draw on their own turf next week, and given the way they set up and defended this evening, another clean sheet is certainly not beyond them. It will be up to Grêmio to break down that gate.

Tonight, however, belonged to Palmeiras and to one man in particular; Gustavo Scarpa. With the playmaker on the pitch set pieces, from any distance, are a genuine threat. Grêmio are now reluctant eyewitnesses to his absurd specialist talents.