Austin Miller
03/02/2020
With one phase in the books, the Libertadores kicks into high gear this week with the beginning of second phase action, which will see sixteen teams cut to eight on the road to the group stage.

13 teams will make their 2020 Libertadores debut this week, joined by a trio of sides, Barcelona, Universitario and Guaraní that advanced from the first phase. Each country will have at least one participating team in this phase, meaning the action will criss-cross the continent over the next two weeks.

Action kicks off Tuesday in Santiago as Brazilian side Internacional take on Universidad de Chile. After reaching the Libertadores quarterfinals last year, Inter consider themselves one of the favorites to reach the group stage from these opening phases. That doing so would set up a pair of derby matches with Grêmio is only icing on the cake.

The Argentine Eduardo Coudet, so successful with Rosario Central in 2016 in this competition, takes over after an impressive run in charge at Racing that saw him lead them to the Argentine Superliga title in 2018-19. At 38, Inter captain Andrés D’Alessandro can still control things in the midfield, and hit a good dead ball too. Marcos Guilherme joins after a pair of seasons in Saudi Arabia, adding to the midfield firepower. In attack, Paolo Guerrero again grabs the headlines, but keep an eye on American born Johnny Cardoso, who could make his Libertadores debut in 2020.

Universidad de Chile were the final team to confirm their spot in the 2020 Libertadores, doing so through the Copa Chile despite a poor year in the Chilean Primera Divisón. La U have had a tough time of things in the Libertadores recently. Last year the Chilean giants were dumped from the competition in the second stage by Melgar. Walter Montillo helped lead Tigre to the Libertadores and now joins La U as a midfield playmaker. Attacker Ángelo Henríquez has been capped by the Chilean national team, while in defense veteran Jean Beausejour is a name well-known for his exploits on the international stage.

DIM’s league form left plenty to be desired down the stretch in 2019, but lifting the Colombian cup secured a Libertadores return after Last year saw DIM taken out of the Libertadores on penalties by Palestino in the second phase. DIM’s leading goalscorer German Cano left for Vasco da Gama, leaving a hole in attack that manager Aldo Bobadilla will need to fill. If you love playmakers, Andrés Ricuarte is the man for you, with the 28 year old expected to feature heavily in the build-up.

Deportivo Táchira last featured in the Libertadores in 2018 when they were eliminated by Santa Fe in the second phase. A run to the Round of 16 in 2016 was Táchira’s last Libertadores success. Like their opponents, Táchira are looking to replace a potent Argentine goalscorer after Lucas Gómez and his 16 goals left for Real Santa Cruz in Bolivia.

Deportes Tolima made their first Libertadores appearance since 2013 in 2019, falling just short of the Round of 16 in a difficult group that included Boca Juniors and Athletico Parananense. Manager Hernán Torres has come across from Atlético Bucaramanga. Torres’ previous spell in charge of Tolima from 2007-2011 featured a trio of international appearances. Jaminton Campaz headlines the Tolima squad, the 19-year-old broke into the squad with a quintet of goals in the latter half of 2019 and was present at the under-17 World Cup in 2017. Though leading goalscorer Marcos Pérez has departed for Saudi Arabia, attacker Luis Miranda has come across to Tolima after bagging 8 goals for Cúcuta in 2019 while another name worth keeping an eye on is Costa Rican international Francisco Rodríguez who could yet play a part up front.

Macará’s only Libertadores experience came in the first phase of the 2018 competition when the Ecuadorians were dropped out of the competition by Deportivo Táchira in the first phase. Paúl Vélez is in charge, as he has been since 2016, overseeing what is undoubtedly the best period of success in club history. Like so many teams in this face, Macará are without their leading goalscorer from 2019 after Michael Estrada and his 17 goals moved to Toluca. 22-year-old Venezuelan José Balza has joined from Deportivo La Guaira while a pair of former Independiente del Valle players in Mario Rizotto and Jonny Uchuari should play a role in the midfield.

Wednesday will see a quartet of ties get underway, beginning in Chile with a match between Palestino and Libertadores debutants Cerro Largo.

Palestino are plenty familiar with this phase of the Libertadores after qualifying for the group stage through the opening phases of the 2019 Libertadores by defeating Independiente Medellín and Talleres. Midfielder Luis Jiménez parlayed a strong performance in last year’s Libertadores to a move to Saudi club Al Ittihad, but the 35-year-old is back with Palestino after playing in just six matches in the Middle East. His ability to dictate play will be critical if the Chileans are to go on another run this year.

Cerro Largo will make their Libertadores debut, becoming the 14th Uruguayan side to feature on South America’s biggest stage, but just the second from outside the Montevideo metropolitan area. While it will be an uphill climb to the group stage a trio of Argentines who were Boca Juniors youth players Agustín Heredia, Gonzalo Lamardo and Tomás Fernández are all worth watching out for.

Wednesday's other early match sees 2019 quarterfinalist Cerro Porteño take on Universitario of Peru. The Peruvians were efficient, if not particularly overwhelming in getting past Carabobo in the first phase. Universitario will hope that their first phase exploits will give them momentum heading into what should be a much tougher test in the second phase. Uruguayan manager Gregorio Pérez’s influx of Uruguayan talent paid dividends against Carabobo with Jonathan Dos Santos netting a crucial equalizer in the first leg. Colombian midfield playmaker Donald Millán is worth the price of admission as well.

A mixture of youth and experience is the recipe for Cerro Porteño, one of Paraguay’s most successful clubs historically. The names are familiar, with many of the key pieces to last year’s success sticking around for 2020. Goal scorer Nelson Haedo Váldez may be 36, but can still easily find the back of the net, while Santiago Arzamendia and Josue Colmán are younger players each with a bright future in front of them.

Wednesday’s later action takes us to Asunción where Guaraní will be hoping to repeat their impressive upset of Corinthians in the 2015 Round of 16. That year, the Paraguayans used a dogged defensive performance and timely goals from Fernando Fernández to drop the Brazilian giants out of the Libertadores. This year, the recipe will be just about the same for the side that eliminated San José 5-0 on aggregate in the first phase.

Corinthians meanwhile will go to Asunción on the back of an impressive 2-0 win over fellow Libertadores participant Santos at the weekend. Argentine striker Mauro Boselli has been in fine form so far in 2020, scoring 4 times in as many appearances. Colombian midfielder Victor Cantillo has received heavy praise from new manager Tiago Nunes for his abilities in the midfield, while Luan has come across from Gremio and needs no introduction to the Libertadores watching public.

The other late game Wednesday features The Strongest and Atlético Tucumán at 3,640 meters (nearly 12,000 feet) above sea level in La Paz.

Like Carabobo in the first phase, Atlético Tucumán made their Libertadores debut in just 2017, capturing the hearts and minds of neutrals everywhere with a run to the group stage that included a memorable night in Quito. 2018 saw Tucumán qualify for the quarterfinals, advancing from a group that included The Strongest, who Tucumán defeated twice for six important points. The 2020 edition of Tucumán have started their year off with a pair of 1-1 draws, including one against fellow Libertadores participants Defensa y Justicia. Leandro Díaz and Javier Toledo have led the team in scoring so far this Superliga season, Guillermo Acosta and Gabriel Rojas have been ever-present fixtures in the midfield.

The Strongest are Libertadores fixtures, with an English name and crest seemingly directed at the South American football hipsters. But this side can play too, with Bolivian internationals Carlos Añez and Jhasmani Campos threats from midfield. For what it’s worth, Campos can strike from anywhere, particularly dangerous in the thin air of La Paz. Up front, any of Harold Reina, Jair Renoso or Rolando Blackburn can be threats, while the 41-year-old Daniel Vaca holds things down between the sticks. If you’re looking for fun, look no further than this side, six of the last seven matches played by The Strongest have featured 5 or more goals.

This week’s slate wraps up Thursday in Guayaquil with a matchup between Barcelona and Sporting Cristal. The hosts impressed in their first phase tie, downing Progreso of Uruguay 5-1 on aggregate over the two legs. Damián Díaz is in form, and Fidel Martínez might have been the most talented player on the pitch in the Libertadores last week.

This week brings a different challenge for the Ecuadorians. Sporting Cristal are Libertadores fixtures, they’ve featured in the tournament in six of the last seven years, and thirty five times overall, but the Peruvians haven’t advanced farther than the group stage since 2004, and haven’t made it past the Round of 16 since they were runners-up in 1997. Midfielder Jorge Cazulo is a club legend while fullback Nilson Loyola is a Peruvian international trying to find his footing again under manager Manuel Barreto. Finally, Ecuadorian attacker Washington Corozo was a successful part of Independiente del Valle’s 2019 Sudamericana title and scored on his debut against UTC Cajamarca this weekend. 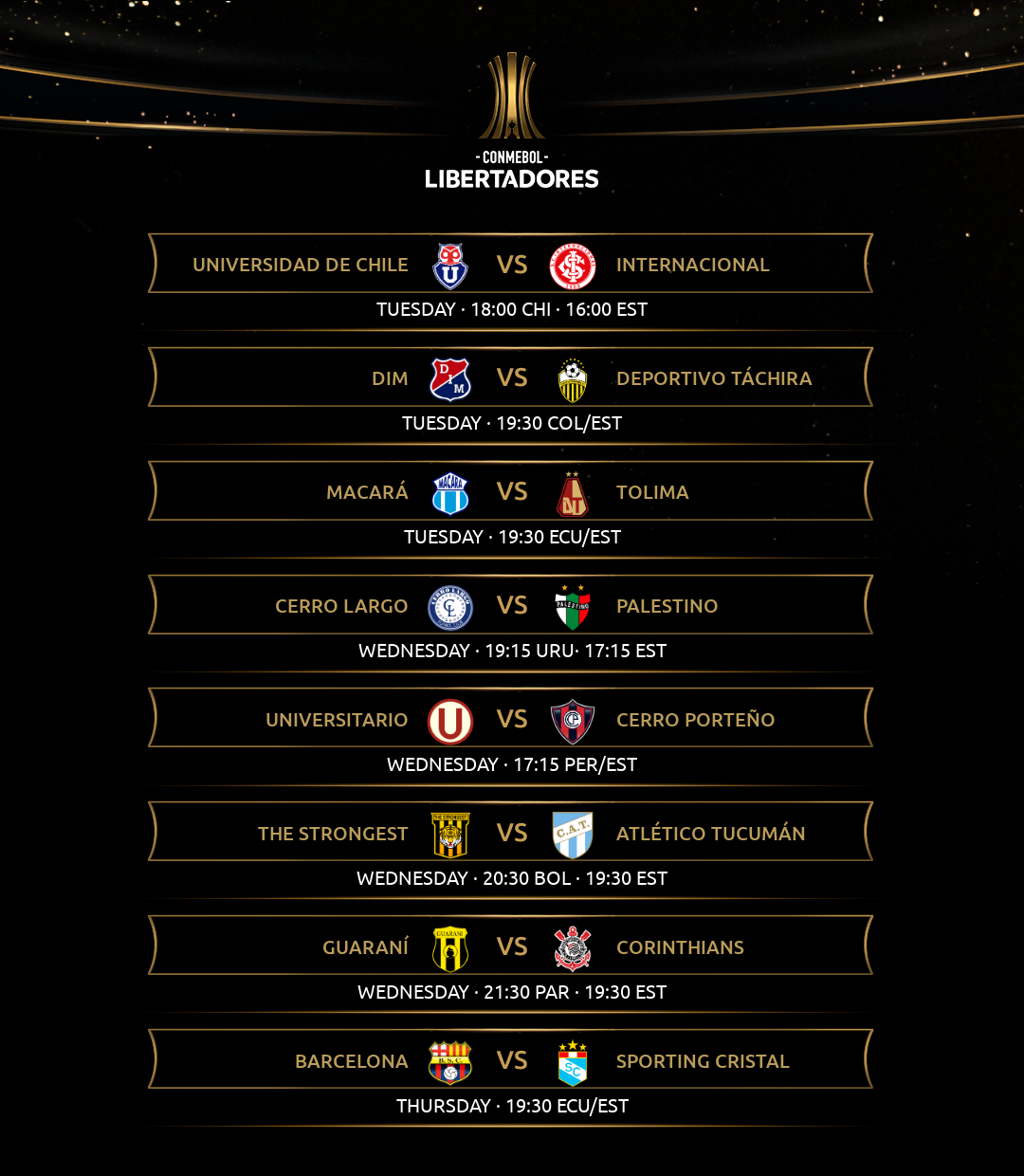