Robbie Blakeley
03/07/2019
Éverton has announced himself with fine performances in the Copa Libertadores for Grêmio, while Gabriel Jesus did the same with Palmeiras in 2016. Can that foundation lead Brazil to Copa América glory on Sunday? 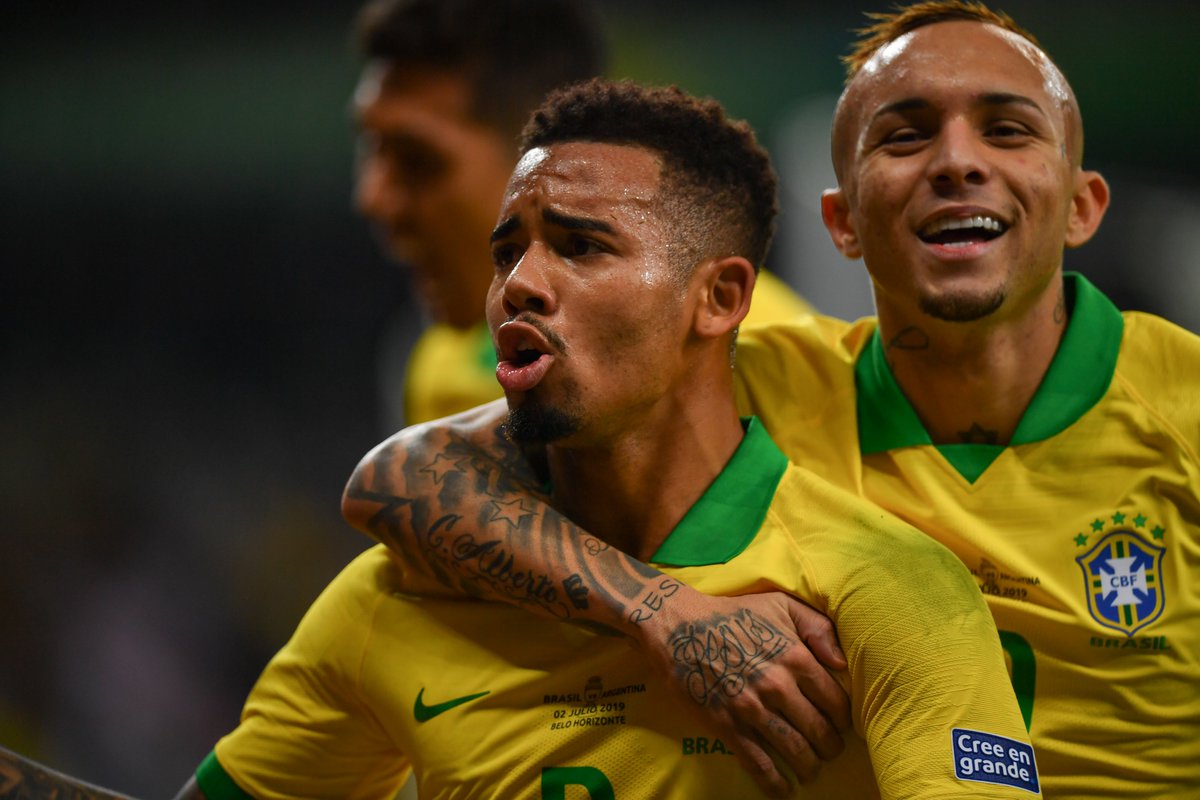 It was not a night on which Éverton, the Grêmio and Copa Libertadores star who has lit up this Copa América so far, shone but nevertheless Brazil did enough to see off bitter rivals Argentina 2-0 on a fiery night at the Mineirão Stadium in Belo Horizonte. The prize? A place in the final and a first match for the seleção at the Maracanã since the 2013 Confederations Cup final when they beat reigning world champions Spain in such convincing fashion.

But while Éverton was substituted at half-time, it was another former star in this corner of the world now making a name for himself on the Old Continent who stole the show – Gabriel Jesus. The Manchester City forward has faced doubts over his place in the starting line-up after the 12 months or so following a quiet World Cup – this past Tuesday evening (2 July) he answered those critics with aplomb.

The 22-year-old striker announced himself to a wider South American audience back in 2016, when he bagged a brace in a Libertadores encounter against Argentine outfit Rosario Central. Three years later, he was back to haunt the country again, opening the scoring on the night after just 19 minutes to give Brazil the platform they needed, before laying the second on a plate for strike partner Roberto Firmino to make sure of Brazil’s safe passage in the tournament.

🤔 Can you name a better pair than these two at the #CopaAmerica this year? We'll wait...

The @Gremio and @CBF_Futebol forward Éverton has been lighting up both the #Libertadores and the @CopaAmerica in recent months! pic.twitter.com/C0ybJZnwdh — CONMEBOL Libertadores (@TheLibertadores) July 3, 2019

Brazil against Argentina is one of the fiercest derbies in international football and, from a Libertadores standpoint, this clash was of particular interest. Who would come out on top between Brazil forward Éverton and Franco Armani, the Argentina and River Plate stopper – defending continental champions?

In Minas Gerais, the visitors rarely looked like putting an end to a wretched run which has seen them fail to beat Brazil in a competitive fixture since 2005. The 50,000-strong crowd pushed the home side on and Jesus proved just why Tite has continued to show such faith in his abilities, hiss movement across the front line causing ample confusion in the Argentine defence.

The host nation are now within touching distance of winning their first Copa América crown since 2007. Brazil are yet to concede a goal in the tournament and huge credit must go to the former Corinthians boss and Libertadores champion Tite who has made the back four the bedrock of his side since taking over in August 2016.

🔙⚽️ It's not the first time @gabrieljesus33 has netted against Argentine opposition. In the 2016 #Libertadores the then @Palmeiras ace scored twice in a 3-3 draw against @CARCoficial.

But at this competition and even in the absence of Neymar it has been those across the final third who have stolen the headlines and helped Brazil plough on towards tangible success.

For now, the plaudits go to Éverton and Gabriel Jesus for leading from the front as Tite goes in search of his first title ass international boss. From the Libertadores to the Copa América, Brazil are 90 minutes away from continental triumph thanks to two jewels in the crown, who introduced themselves to a wider audience in South America’s premier club competition.