@NickEllerby
22/11/2019
Getty
Whereas River have been consistent over five years, Flamengo have been consistent over 5 months. It's South America's best against South America's most in form. Flamengo arrive in Lima red hot but have they burnt themselves out too soon? This game will prove their most difficult test, in what is turning out to be a defining season for the Rio club and their Portuguese manager.

Until June, Flamengo looked like another early Libertadores exit waiting to happen. Then Jorge Jesus arrived. They’ve won 21 of their 27 league games since the gringo took charge, only losing once and playing some very attractive football in the process. The team has given its legions of supporters in Brazil cause for optimism again after some lean years where the club was sorting out its finances. Flamengo are now only two points away from a first league title in 10 years and they have the chance of sealing the home and continental trophies this weekend, depending on other results.

Whilst instilling an organisation and a drive in this team that wasn’t quite there before, Jorge Jesus’ squad was boosted by the signings of two quality full-backs, Filipe Luis and Rafinha, the central defender, Pablo Mari, and midfielder, Gerson. Luis and Rafinha will be critical in calming down the more excitable youngsters once River start winding them up.

Flamengo also have the tournament’s top scorer in Gabriel Barbosa and top assist provider, Bruno Henrique. The midfield has been in a groove for a few months now and if they can just keep this wave rolling for one more game they can win their first Libertadores in 38 years. Fluminense’s academy product Gerson has been the big revelation after coming back from a two year spell at Roma and on loan to Fiorentina. River will need to disrupt him and his rhythm on Saturday evening if they are to control the ball as Gerson is often the starting point for Flamengo’s best moves and he protects the ball very nicely under pressure. In Everton Ribeiro and Giorgian de Arrascaeta, Flamengo have two creative players who can find space from which to play in their red-hot forward partnership. Willian Arão, a hugely improved player under Jesus’ management will have to put in the shift of his life to snuff out River’s counter-attacks.

Jesus will not sit back, Flamengo will attack with seven or eight players and probably try to take the initiative early on. They have been playing with this high intensity for six months and tiredness could play a factor at the end of the game as Jesus is not one to rotate his sides too much.

Finally, should they need him, Diego Alves is a penalty-save expert who kept out spot kicks from Messi, Ronaldo and Griezmann when playing for Valencia in Spain. But let’s hope it doesn’t come down to that, eh?

Jesus will probably go with either a 4-4-2 or 4-2-3-1 with Bruno Henrique and Arrascaeta liable to switch positions. 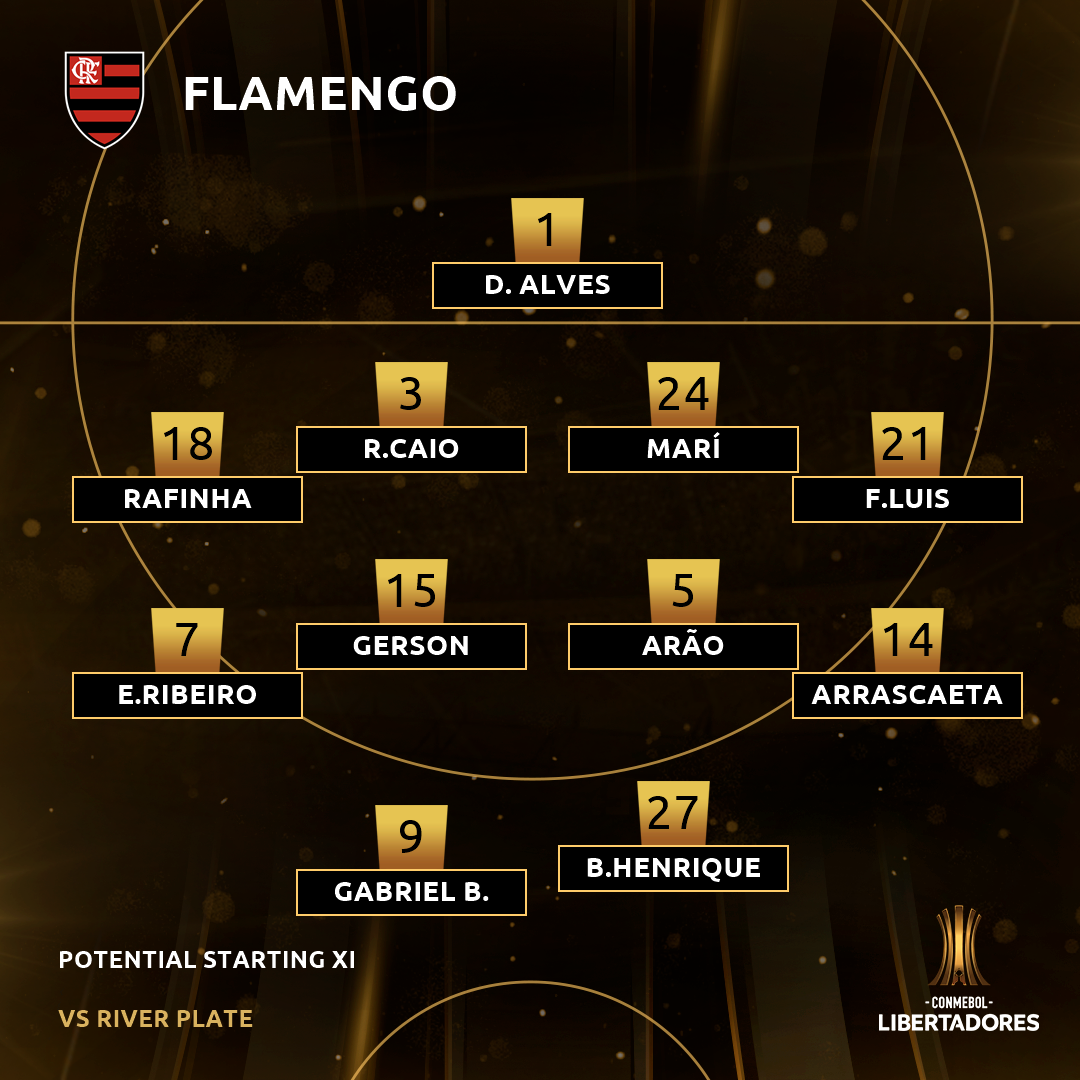 Path to the final:

After losing group games to LDU Quito and Penarol, Flamengo overcame a 2-nil first leg deficit to overcome Emelec on penalties and the self belief has been huge ever since. They did a job on Internacional before blowing Gremio away 5-0 in the semi-final second leg prompting euphoria in the Maracana. Flamengo arrive in Lima confident and buoyed buy their huge home support. They now face their sternest test for a shot at greatness. 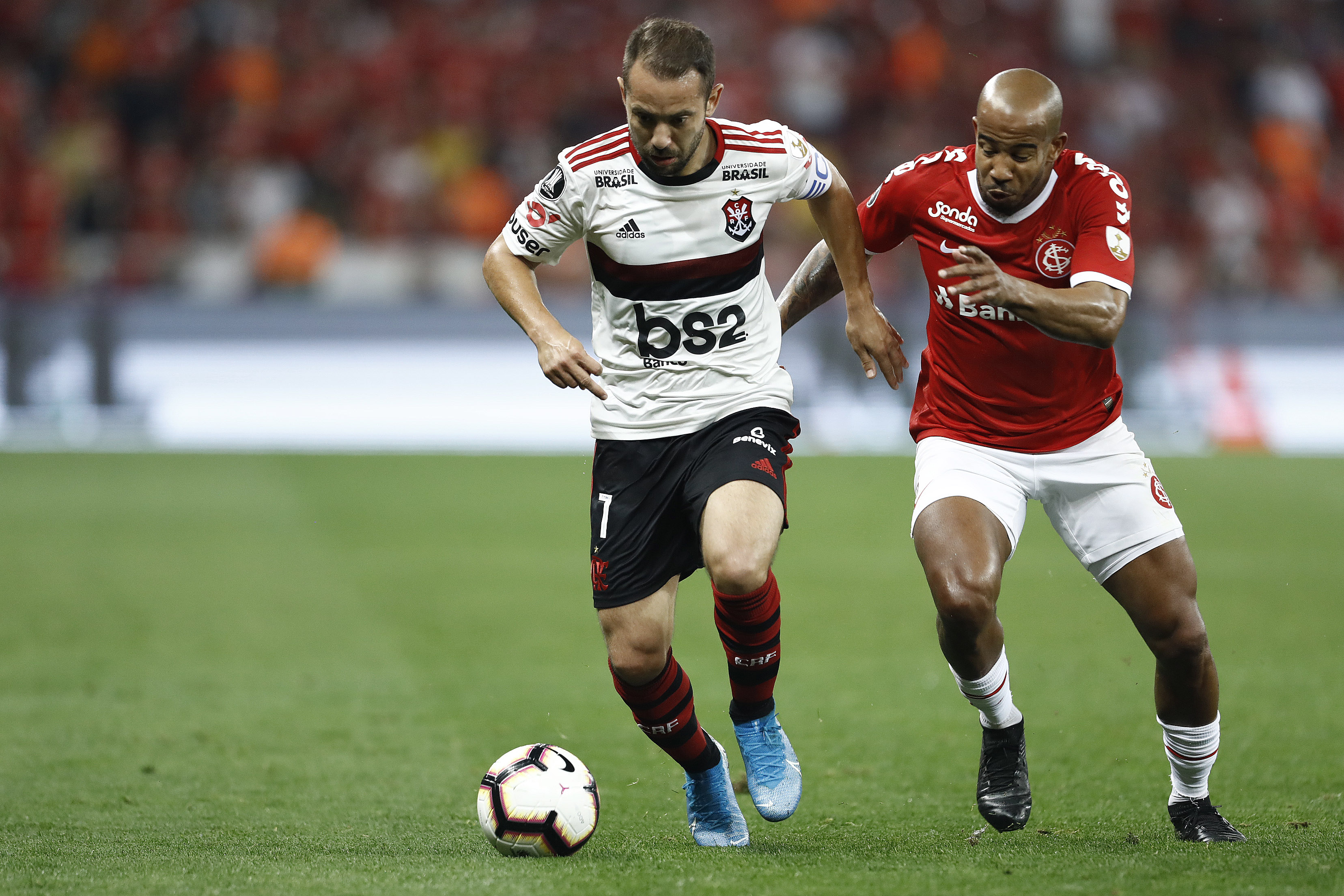 Taking the captain’s armband from Diego at the end of the group stage, Everton Ribeiro has looked better and better as the tournament has gone on. He was critical in finding little pockets of space from which to launch attacks against a physical Gremio side in the semi-final.

A player of real quality, Everton shone for Cruzeiro as they won the league in 2013 and then, a year later, as he was breaking into the Brazil squad, moved away to Al-Ahli and eventually played only 134 minutes of international football over 6 caps under Dunga. He returned to Brazil, signing for Flamengo in 2017.

He has three goals and three assists in the Libertadores this year and is increasingly the player who finds space when it is most at a premium. His quick feet allied with a mature footballing brain provide River with a another conundrum to solve. 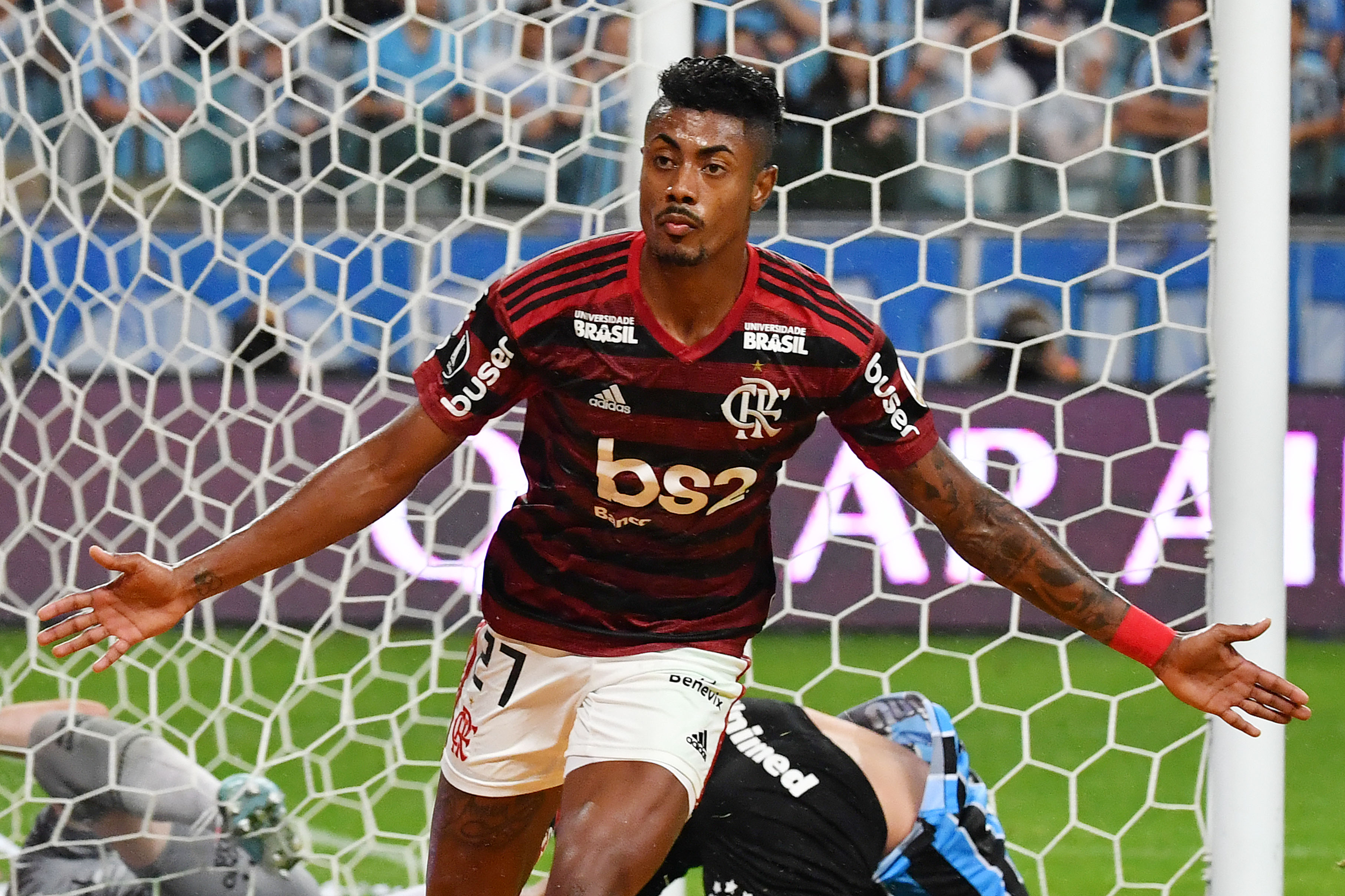 The 28-year-old from Minas Gerais is on fire right now. Bruno Henrique was clocked running at 38km/h in a match against Internacional in the Libertadores quarter-final this year (see below), passing the record previously held by Gareth Bale.

His pace in an obvious weapon as Flamengo break forward and he will look to exploit the space left by River’s full-backs. He is in rich form, scoring 10 goals in his last nine games.

Another player with something to prove, this season he’s had the bit between his teeth; he has the most assists (6) in the Copa Libertadores this year and has scored on five occasions, he is also the Brazilian league’s second top scorer after his mate, Gabigol.

Will probably be used wide on the left or as a second striker. Bruno Henrique has been making devastating runs into the box all season and has an eye for a finish. He will look to run at River’s defence from the get go.

Flamengo’s high defensive line can leave them exposed at the back, so if River can get their speedy attackers in a two on two with Pablo Mari and Rodrigo Caio they may have some joy. Just like River, Flamengo like to use both full-backs in attack and that space was exploited by Vanderlei Luxemburgo and his Vasco de Gama team recently in a thrilling 4-4 draw.

The other thing is Flamengo’s relative lack of big game experience compared with their opposition here. Gabriel Barbosa received two yellows for protesting to the referee in their last match and will have to control himself against a River team who will look to rile him and his team up. Tempers flared too in the game against Vasco and Flamengo’s composure will be examined on the biggest of stages. Luckily, they have Rafinha and Filipe Luis who add some vital ‘big final experience’ to the squad.

Impact options from the bench: 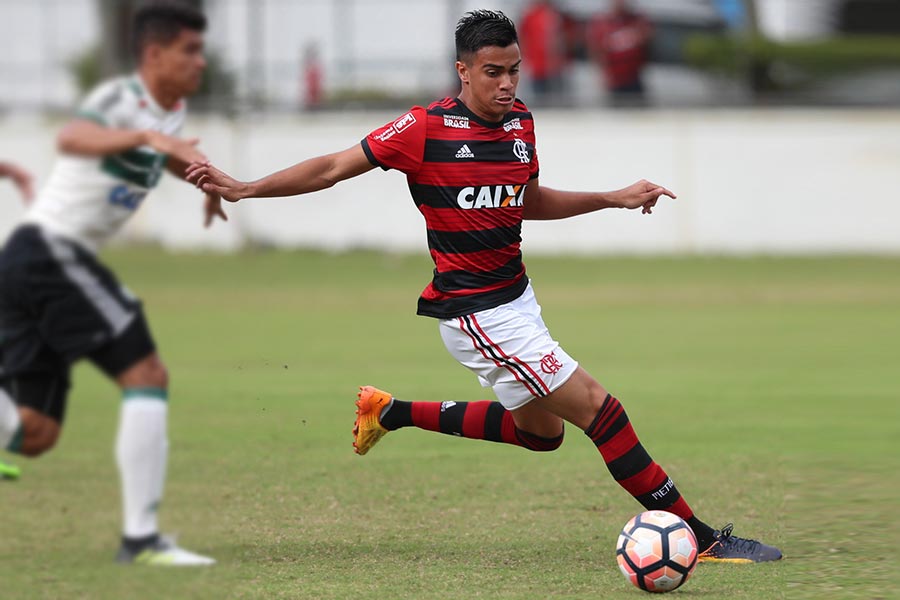 Flamengo don’t really have many players outside their starting eleven who can change a game of this magnitude. But Reinier certainly has the potential. He made the transition from youth football to professional football look easy this year, scoring on his full debut in September. He’s now an important option off the bench for his manager, scoring four times and assisting twice in his first 12 appearances.

Reinier displays great movement and gets into dangerous positions between the opposition midfield and defence, often making intelligent, late runs into the box where he shows great composure in front of goal. His superb vision and excellent link play with the wingers and forwards, plus his ability to hold the ball up well also marks him out as a potential false-9 or second striker.

Expected to feature if there is an injury or if Flamengo need a goal late on.