Robbie Blakeley
12/09/2019
Athletico Paranaense beat Internacional 1-0 in the Copa do Brasil final first leg. The side can now play for a draw in the return encounter, with a spot in the 2020 Copa Libertadores on the line. 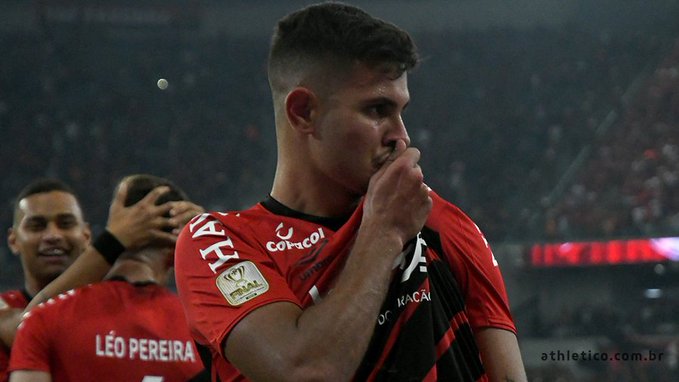 So, we are now just 90 minutes away from knowing Brazil’s first participant in the 2020 Copa Libertadores. This past Wednesday evening (11 September), Athletico Paranaense beat Internacional 1-0 at the Arena da Baixada in the first leg of the Copa do Brasil final.

The return encounter will take place on 18 September, at Inter’s Beira-Rio stadium. Athletico will have the luxury of playing for a draw while Inter, who were eliminated from the Libertadores by Flamengo on home soil, will be striving not to make the same mistake twice in a matter of weeks.

After a tetchy first half where it appeared both sides were happy to sit back and attempt to hit on the counter-attack, a well taken strike by Bruno Guimarães just before the hour-mark jolted this vital clash into life. With home advantage, the goal spurred on Athletico – who are looking for their first ever Copa do Brasil crown – as they out Inter to the sword in the final half-hour of the game.

🏆🇧🇷 In the first leg of the Copa do Brasil final, @AthleticoPR beat @SCInternacional 1-0 at the Arena da Baixada.

🔜 Next week, the return encounter will decide Brazil's first participant in the #Libertadores 2020!

Inter, meanwhile, have goalkeeper Marcelo Lomba to thank for keeping the score at 1-0, and they can go into the second leg with the contest still open. With just a solitary strike currently separating the two teams, Inter can be confident of turning this tie on its head, particularly in front of a packed out Beira-Rio and with the likes of Andrés D’Alessandro and Paolo Guerrero – hardly strangers to the big occasion – working across the front line.

Next week, Inter need a victory by a two-goal margin to get their hands on the trophy, and coach Odair Hellmann is still looking for his first piece of silverware in the hot seat. This, without a doubt, represents his best chance of doing that since taking the job last year.

Tiago Nunes, in the Athletico dug-out, has already tasted cup success, winning the Copa Sudamericana last year with the Brazilian outfit. That triumph of course led to a spot in the 2019 Libertadores, where they were eliminated by current semi-finalists Boca Juniors.

Winning the Copa do Brasil also leads to the Libertadores. For Nunes and his cohorts, history could well be on the verge of repeating itself.